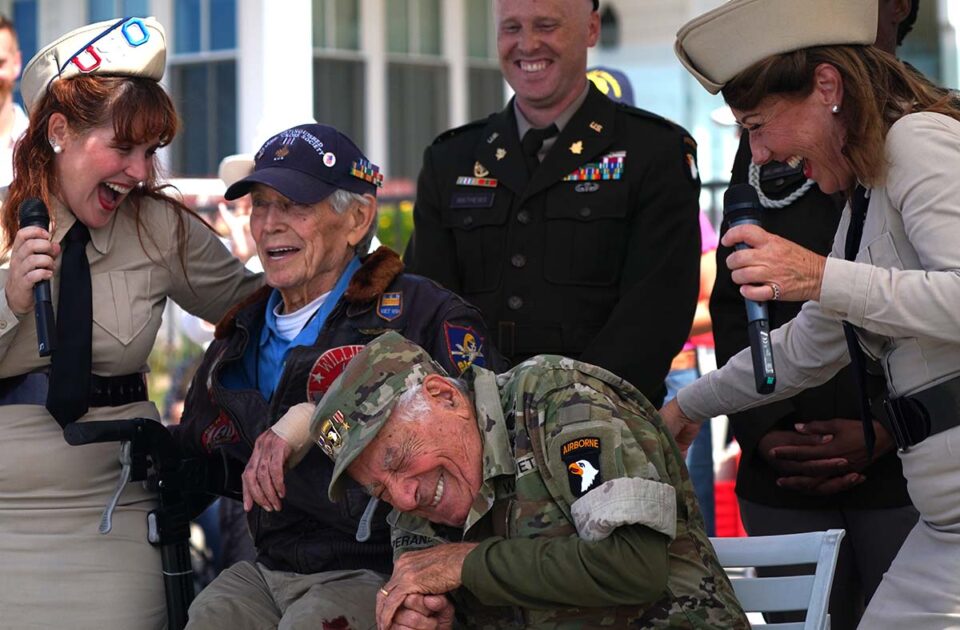 As the two white-haired men jumped out of a C-47 over Coronado’s Central Beach, few observers knew the horrors they faced in war and how they have endured ever since.

One became a teacher and author, the other a commercial airline pilot.

Although once thinking that a tandem flight was tantamount to “a message on a passenger pigeon leg going out the door,” World War II veteran Vincent Speranza was all smiles Saturday.

“This is my fourth tandem jump and by far the best,” said the 97-year-old Army veteran. “I have never had the jump when the day was perfect, the equipment was beautiful. The man who jumped me was experienced and I am happy to say that when we landed, we landed on his bottom, not mine.”

The veterans jumped as part of the festivities on Day 2 of Force-Con, a three-day event that honors legendary aviators.

On Sunday is an art festival from noon to 5 p.m. at Ingram Plaza at Liberty Station, which includes displays by award-winning artists, authors and filmmakers from around the world.

A “Meet the Heroes” panel will include WWII Army veteran Speranza and Holocaust survivor Tibor Spitz. The Marine Corps Band will perform. Food, beverages, U.S. Army displays, WWII re-enactors and community resources are among other features.

For more information, go to www.force-con.com.

“This has been a remarkable day for me,” he said. “My first time I rode in a parachute … under duress and I was badly injured, but today I enjoyed it even with my prosthetic leg.”

Sharp said he had a good time “up there,” calling the weather perfect for parachuting and adding, “You could see forever.”

On Friday night, teacher and author Speranza described how he began jumping at an advanced age.

At age 80, he began to feel the pains of growing older, but pledged he would jump once more. His last jump had been in 1945.

At age 89, he was at a 101st Airborne Association gathering in Tampa, Florida, and spotted a sign advertising jumping sessions.

He applied and met the physical requirements, but was dismayed to learn he couldn’t fly solo over the age of 80.

It was then he started tandem jumping. He had his first tandem jump with Mike Elliot, who also twice did tandem jumps with former President George H.W. Bush.

Sharp grew up in the Tulare County town of Dinuba and entered the Naval Aviation Officer Candidate School after graduating from Fresno State University in 1963.

He received his Navy pilot wings in 1964 and flew the F-8 Crusader in Vietnam. During that war he was stationed on the aircraft carriers USS Bon Homme Richard (CVA-31) and USS Ticonderoga (CVA-14).

Briefest POW of All Time

On Nov. 18, 1965, he was shot down and had his shoulder badly injured on a mission over North Vietnam. He had just turned 26 when his aircraft was hit by enemy fire, forcing Sharp to eject into the Tonkin Gulf.

Sharp was captured by two North Vietnamese fishermen aboard a sampan. But his squadron mates dive-bombed to try to distract them. The fisherman had taken his 28-caliber revolver, but he had another pistol in his jumpsuit and shot the fisherman who carried an AK-47. He escaped and was rescued.

Sharp — the career airline pilot — was dubbed the POW for the shortest amount of time.

To this day he is haunted by the fatal shooting, but to survive he had no choice.

“I hate it,” he told the crowd on the beach. “I hated having to do that. And after I shot the man three times in the face, I told him I was sorry. And I really did mean it. Sincerely, I was very lucky person that day. And I was a victim of circumstances.”

Sharp is a distinguished combat pilot and the recipient of the Navy Distinguished Flying Cross, 12 Air Medals, Purple Heart and the Navy Commendation with Combat V (valor) Medal. His flight records include piloting Vought F-8 Crusaders and Grumman F-11 Tiger during the 1960s.

Speranza was born March 23, 1925, in Manhattan and entered the military as an infantryman when he turned 18. He had tried to join when he was 16, but was told to wait.

When he found out he would get higher pay, he volunteered for the Parachute Infantry and was sent to Fort Benning, Georgia, for training. He was sent overseas with Company H, 3rd Battalion, 501st Parachute Infantry Regiment in the 101st Airborne Division. He fought in combat as a machine gunner.

He is the subject of a famous story about his comforting of wounded soldiers at a church in Bastogne, Belgium — scene of the Battle of the Bulge.

His artillery mate asked him for a drink. He searched destroyed buildings and found a bar with the beer tap still working. Not finding any containers, he used his helmet to transport the beer back to the church.

Others in the church who were wounded also asked to imbibe. When he returned from his second beer run, a surgeon wasn’t pleased that he was giving a beverage to those who would need surgery.

Speranza later found out that a Belgium beer company heard of his exploit and created “Airborne Beer.” In Bastogne, beer is served in helmet-shaped bowls in his honor.

Near the end of the war, Speranza and his fellow paratroopers discovered a Jewish concentration camp near Dachau that included mass graves and ovens used to cremate the dead.

Asked Friday night what he would tell Holocaust deniers, Speranza said: “You’re a bunch of idiots. How can you say that something didn’t happen that so many of us witnessed? And if you’re really serious denier, you better go get re-educated because your history is off.”

Speranza tells many stories of his time in World War II in his book “Nuts!”

Speranza recalled the death camp survivors crawling on their elbows because of weakness and kissing the soldiers’ boots in gratitude.

According to accounts, when his unit reached Adolf Hitler’s infamous “Eagle’s Nest,” Speranza saw a map depicting the Axis Powers’ plans for post-war victory where the entire globe was divided amongst the German, Italian and Japanese governments.

In an interview in 2021, Speranza recalled his first parachute jump.

“It’s a big beautiful thing and you’re swinging,” he said. “It’s the most beautiful thing in the world. Whatever scary sensations you had before disappeared. It’s like somebody just took you in a cradle you know and then all of a sudden, the ground comes up pretty fast.

“But your training kicks in. … When you land, you can’t believe it. You’re on the ground and you’re looking up like this.”

Speranza talked about his current mission: “I’ve spent the last eight or nine years of my life doing all of these things. I decided that I’m going to use the rest of my life to stay in contact especially with the young people to remember the message that freedom is not free.

“Somebody’s got to pay the price. We paid the price then, but you people stay ready because there’s a lot of people in the world [who] don’t like us. … Stay in shape and take your training seriously.”

Speranza is serous about his own readiness. He has his eyes on another jump when he is 100.

Man Loses Control of Vehicle, Crashes Through House and Dies