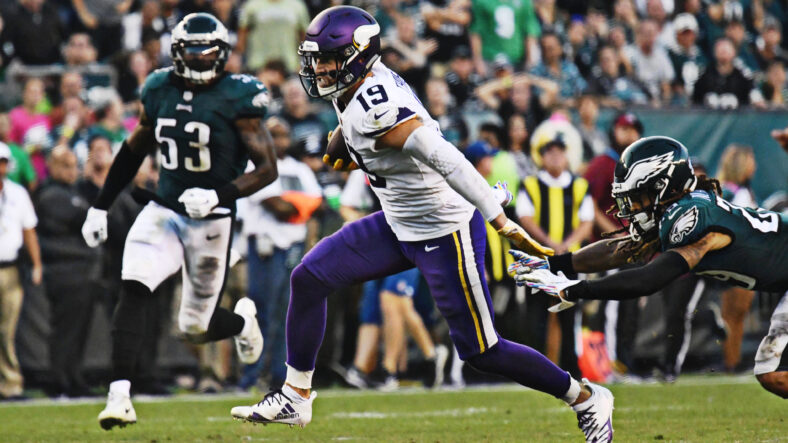 While you, the fan, have a strong attachment — not in a good way — to the Minnesota Vikings 2017 NFC Championship loss to the Philadelphia Eagles, most of the team’s existing players don’t really care.

Why? Well, 91% played football elsewhere in January of 2018, with only five Vikings players remaining from the NFC title game five years ago.

Indeed, like most NFL teams, Minnesota’s roster has turned over tremendously in the last 243 weeks, leaving the franchise’s pillar players left standing. Heading into a Monday Night Football date with the Eagles, these are the five players who also played in the 2017 NFC Championship:

Dalvin Cook was on the roster but did not play because of a torn ACL suffered three months prior.

Of course, four of those five men are team captains, so the memory of vengeance can be kept alive. But after Ham, Hunter, Kendricks, Smith, and Thielen, most of the current Vikings players were too young to play professional football.

On January 21, 2018, the Vikings scored first in the NFC Championship, as tight end Kyle Rudolph trotted into the endzone from 25 yards away on a pass from quarterback Case Keenum. Vikings fans could feel weird butterflies inside their stomachs because many viewers had never sniffed a Super Bowl berth so sharply. It was happening — Minnesota scored first, could rely on a deadly Mike Zimmer defense, and would host a home Super Bowl at U.S. Bank Stadium.

If you care, this is how the Vikings ended up with Kirk Cousins at quarterback. Minnesota’s brass convinced itself Keenum was the source of untimely futility, and ex-general manager Rick Spielman signed Cousins on the dotted line two months later.

Well, the Vikings haven’t been as good since the month of January in 2018, mainly because the aforementioned Zimmer defense died, particularly in 2020 and 2021. And because of the Zimmer-defense obituary, Minnesota hired a new everything in the front office about 8-9 months ago.

The Vikings travel to Philadelphia, compared to the 2017 NFC Championship team, with 48 new players on the active roster, a new general manager in Kwesi Adofo-Mensah, and a brand new coaching staff led by Kevin O’Connell.

Interestingly, Adofo-Mensah and O’Connell grew up cheering for the Eagles, thanks to a generalized fascination with Randall Cunningham, who changed the NFL in the late 1980s and early 1990s — before he joined the Vikings in 1997.

Your scars are real. Forty-eight players and a new coaching staff do not care what happened five years ago. Ham, Hunter, Kendricks, Smith, and Thielen may remind the group of past vibes in that building, but that’s about it.

So, if the Vikings outduel the Eagles on Monday night, you can relish in the moment — along with five Vikings.

The Outsized Impact of Blockchain on Finance