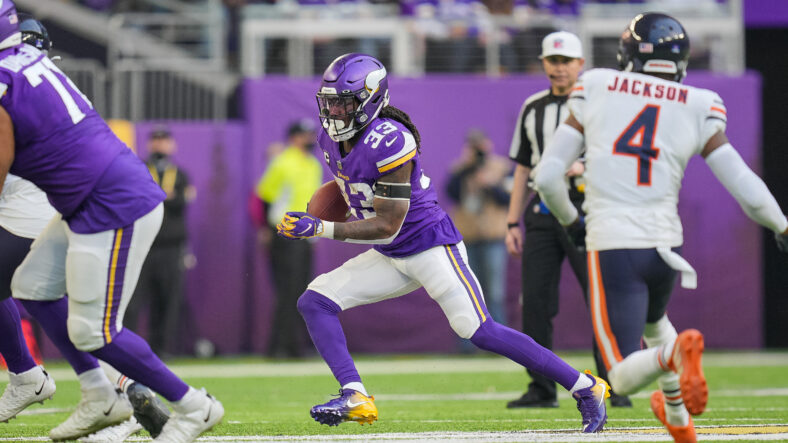 Dalvin Cook belongs to an arsenal of Minnesota Vikingsweapons that can strike at any moment. When healthy, he has been a top running back in the NFL throughout his entire career.

Four games into the 2022 season, Cook is on the outside looking in at the top 10 running backs in the NFL statistically. This week presents a great opportunity to get back on track with a matchup against the Chicago Bears.

Has Dalvin Cook Slowed Down?

While Cook is definitely off to a slower start, it’s unclear if he has actually lost a step. To the naked eye, he doesn’t look as quick and explosive as we have seen in previous seasons. There have also been occurrences where he has been tripped up or tackled easier than usual.

That said, it’s a brand new system, and Cook could very well be adjusting. Furthermore, new head coach Kevin O’Connell is still learning and growing. Every player has different strengths, and it might take some time before O’Connell gets in sync with the strengths of Cook.

Before the season started, fellow Vikings Territory writer Adam New predicted a career year for Cook. I still think there is a slight possibility of that happening despite the slow start. His reasoning makes sense, which is why I still think it’s possible.

He has put up some staggering numbers despite having never played more than 14 regular season games in a single season. A more balanced offense and maybe even more willingness from the current coaching staff to spread the workload may help Cook avoid breaking down this year.

– Adam New, on Cook having a breakout year.

There is cause for concern, though. The Vikings have used Cook less in critical situations this year. There are a handful of guesses as to why. But no matter how you look at it, this is concerning for a player taking up as much of the cap as Cook does.

This week’s matchup against the Chicago Bears is a chance for Cook to get back in the Top 10 statistically. The Bears have given up more rushing yards than any other team this season. Teams are averaging 5.1 yards per carry against them. For comparison, Cook is averaging 4.4 yards per carry.

It would be wise for O’Connell to dial up a heavy dose of Cook this Sunday and attack Chicago, where they have proven themselves to be weak. This will also open up the passing game and make play-action harder to defend. Getting Cook going has a lot of upsides.

What if Cook Doesn’t Get Cooking?

If Cook cannot get it going against the Bears, I hope to see more of Alexander Mattison going forward. Mattison has played faster this season and looks more explosive than in previous seasons. He has made the most of his opportunities, and it’s clear the new coaching staff trusts him to be the main back during any point in the game.

On the following touchdown reception, you can see Mattison break tackles and accelerate for the touchdown.

At the end of the day, the Vikings are winning right now. There is no need to fix what isn’t broken, but getting an impact player like Cook rolling will make them a better team.

Shiba Eternity Game Criticized by Community, Here’s What They Are Really Asking For

4 Weeks of Wonder for Justin Jefferson

49ers Star Sees Carbon Copy of Himself on Vikings Roster

The Vikings 4 Realistic Options at QB in 2023