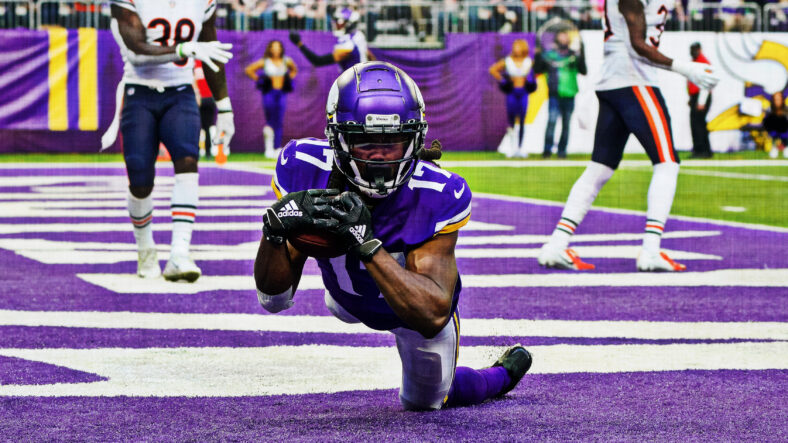 A popular theory among Minnesota Vikings faithful involves the seemingly guaranteed improvement of third-year wide receiver in K.J. Osborn in 2022. In 2021, Osborn carved out his ownership of the team’s WR3 job, a craving by Vikings fans since the days of Jarius Wright.

But his prognosis for improving those numbers isn’t a sure thing with the regular season three months away. Why? For one simple reason — Osborn may have a difficult time topping his 2021 output because of the return of Irv Smith Jr. to the Vikings offense.

Smith Jr. missed all of 2021 due to a torn meniscus, canceling his long-awaited “breakout season” forecasted by fans and pundits every year since 2019. But now, Smith Jr. is back, ready to put a purple thumbprint on the Vikings offense.

How does this affect Osborn? Simple. The targets may not be there for the Miami alumnus. Osborn could command the utmost attention in 2021 because the Vikings didn’t have their target-needy TE in the gameplan. Of course, Tyler Conklin played well in the stead of Smith Jr., but he was targeted 87 times. Smith Jr., per his potential and athleticism, should command north of 100 targets from Kirk Cousins with Kevin O’Connell in charge.

Smith Jr.’s targets, in theory, will siphon away Osborn’s. The top tight ends in the world are targeted 130+ times per season, and if Minnesota wants to make Smith Jr. its clear-cut TE1, he may nibble at that target load.

Plus, the Vikings don’t have a tried-and-true TE2 behind Smith Jr. It’s Johnny Mundt, a free agent from the Los Angeles Rams, and some pocket lint. Smith Jr. will be targeted fiendishly by the Vikings, especially if no ‘second tight end’ is even on the roster.

The re-rise of Smith Jr. will suck targets away from everybody — sans Justin Jefferson — and Osborn could be affected. While he won’t personally diminish in Year 3, keep an eye on the “numbers game” for targets in 2022.

Finally, to combat the “the Vikings will throw more with O’Connell in town” inevitable argument, the 2021 Rams didn’t throw the football as many folks tend to surmise. Los Angeles ranked 14th leaguewide for pass-play percentage, slightly ahead of the Vikings, who ranked 19th.

It is not a lock for the Vikings to throw the ball at a Top 5 clip, as fans often claim.

Yikes, where do the Vikings go from here?