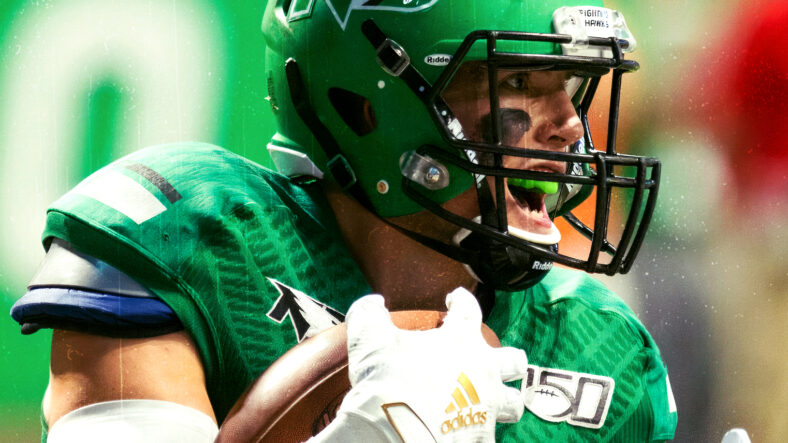 The Minnesota Vikings spent the latter part of last week forming a practice squad after the 53-man roster trimdown on August 30th. Most names returning to the newly-expanded squad were familiar.

But not Travis Toivonen, a new member of the Vikings from the University of North Dakota.

Toivonen is a wide receiver who’s spent time with New York Giants and Seattle Seahawks. He was a part of the Giants roster until last week when New York, too, continued the process of roster-shaving to a final depth chart.

The 24-year-old will live on the practice squad with 15 others and hope for a regular season call-up in 2022. Toivonen is from Minnesota, born in Red Wing, and played football at Red Wing High School. Standing 6’4′ and weighing 212 pounds, he finished his collegiate career at North Dakota in 2019.

At UND, Toivonen nabbed 139 catches for 1,719 yards and 13 touchdowns in four total seasons — not bad. He was a target of Trey Lance, who quarterbacked the 2019 Bison team and was later plucked out of the NFL Draft by the San Francisco 49ers in 2021.

Toivonen’s senior season was particularly productive as the Minnesota native seized 48 receptions for 684 yards and seven paydirts. Because of the small-school status, he was undrafted during the pandemic draft cycle of 2020 and turned to the Fan-Controlled Football League, where he played for the Zappers.

Toivonen peeled back the curtain last summer, writing for The33rdTeam.com. He explained his journey to date. You can read that here.

He grew up as a fan of the Vikings.

Don’t Let Someone Steal Your Home

The Vikings 2022 Defense by the Numbers: After Week 3