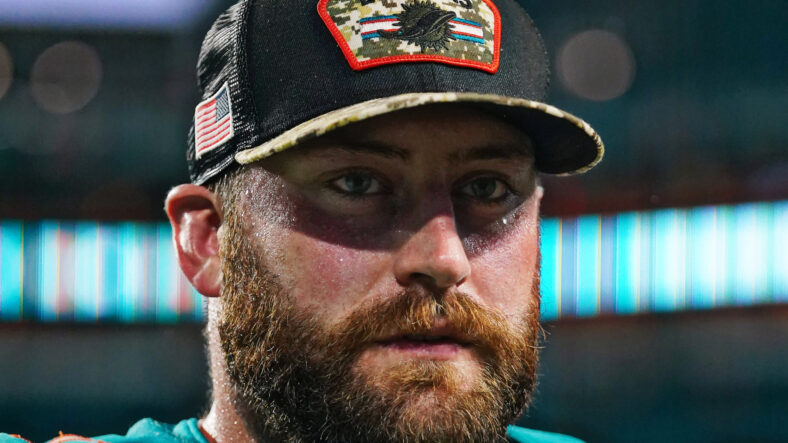 The veterans of the 2022 Vikings report on July 26th, while rookies arrive on the 24th. Training camp starts the football season after a long waiting period. For some players, training camp is their only chance to ever become professional football players. For others, it’s just a warmup for the season.

Position competitions are also an important part of the process, and whole career trajectories are decided that way. The biggest battle in the Vikings camp is probably for the right guard spot, as there are multiple contenders without any favorite.

The Competitors for the Vikings RG Battle

Jesse Davis was a free agent signing from the Miami Dolphins. Davis went to college in Idaho and went undrafted in the 2015 draft. However, he is still in the NFL, which is much longer than expected from any player who doesn’t hear their name called on draft day.

The offensive lineman spent his first preseason in Seattle before they cut him on final cut day. In 2016, Davis signed with the Jets and was part of their practice squad for a few weeks but eventually, they cut him as well. For the second half of the 2016 season, the Dolphins signed him to their practice squad. In the following offseason, he finally made the active roster. Some careers take longer to get going, and he is a good example.

Between 2017 and 2021, Davis started 72 games and appeared in 80. He has plenty of experience as guard and tackle, while he played better as a guard. His play on the outside wasn’t pretty last season, but whenever he lined up as a guard, it was average — which would be an upgrade.

The Vikings have their tackles set and brought in Davis to battle for the starting right guard job. The solid veteran will turn 31 right after the season opener and has by far the most experience among the right guard candidates.

Just like Davis, Reed signed a contract with the Vikings in free agency. There are more similarities. He also was undrafted in the 2015 draft. Reed played his college ball in Minnesota State for the Mavericks, Adam Thielen’s Mavericks.

His first four NFL seasons occurred in Jacksonville, as he switched between practice squad, active roster, and injured reserve. In 2019, Reed had a short stint in Miami. After another time on the waiver list, the guard signed a contract with the Carolina Panthers and played a few games in 2019 and most games in 2020 for the Panthers. Once again, as a free agent, he signed with the Indianapolis Colts, where he shared the offensive line room with Quenton Nelson.

The journeyman Reed appeared in 61 games over his career and started 29 for various teams. He ended his 2021 campaign with a 67.2 PFF grade, ranking him 38th of 82 eligible guards. That’s just slightly below Ezra Cleveland. To be average on both guard spots is the goal for the Vikings after years of mostly bad guard play.

Unlike the other two contestants, Ingram entered the league through the draft. He was selected in the second round by general manager Kwesi Adofo-Mensah. He is the most talented of the bunch but also the least experienced.

Ingram is a powerful guard. He had more experience than most offensive linemen in the draft. Despite playing a lot of games, even his worst games weren’t a disaster, and he played at a consistent level. Most had him going later in the draft because of off-the-field concerns.

Even his play was graded by most pundits as a third or fourth-round worthy. The fact that the Vikings still chose him with the 59th pick is encouraging. They saw something in him and didn’t want to risk losing him to a different team. He’s a rookie and might take some time. However, his talent will eventually get him on the field.

Who Starts for Vikings at RG in Week 1?

In Week 1, the first tough matchup will be Kenny Clark, the scary Packers defender. He single-handedly wrecks gameplans, and the Vikings struggled for years to contain him. He didn’t record a sack in the last two seasons against the Vikings, but in the five games prior, he sacked the purple QBs six times. The winner of the battle will have to beat out either two veterans with the reputation to be solid or one of those veterans and a talented rookie. That by itself should lead to an upgraded offensive line.

Predicting the outcome of a camp battle is never easy. However, one of the veterans will open the season as the starter. The prediction here is that Jesse Davis will start in Week 1. His experience will help him to win the starting gig as Vikings’ right guard in the camp battle over his teammates. But after a few weeks, the more talented Ed Ingram will replace him in the starting lineup. The Week 7 bye week could be a good time for the change.

Time to Renew Your Interest in Automatic Subscription Renewal Laws

The Price for Baker Mayfield Was Insanely Low

Explained: Predictions and Analysis for Vikings-Lions