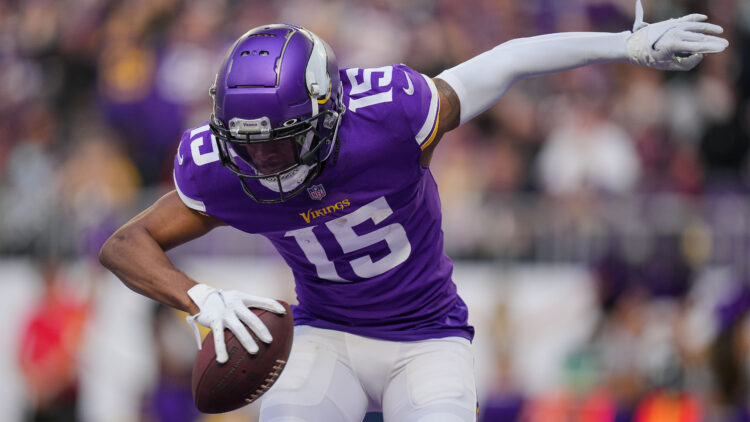 The Vikings searched for a third viable receiving option for years. It was Thielen, Diggs, and a big question mark. In 2021, however, the Vikings finally found a WR3. Justin Jefferson and Adam Thielen are still the two main targets, but K.J. Osborn established himself as third in the pecking order. He surprisingly emerged for the Vikings and recorded 655 yards and seven touchdowns after not seeing the field on offense in his rookie campaign.

His continued development will be crucial for O’Connell’s plan to implement a pass-heavy offensive system. His Rams played with at least three receivers on 87% of the plays, while the Vikings did the same on just 60%. Osborn will be on the field more often, and also a fourth receiver will be necessary more often. The Quest changed from finding a WR3 to finding a WR4, but the Vikings already have some interesting options for that spot.

Ihmir Smith-Marsette was one of Rick Spielman’s last draft picks as general manager of the Vikings. The fifth-rounder from Iowa recorded over 1,600 receiving yards and 14 touchdowns in four years on campus. He also added almost 300 yards and four touchdowns on the ground and two scores as a kick returner. His versatility could help him to clinch a big role.

He showed flashes of his talent in Week 18 against the Bears. The game was meaningless for most but important for the receiver, as he came into the game with just two catches for 13 yards. In that game, however, he exploded for 103 yards on just three catches. He has shown to be a solid deep threat for quarterback Kirk Cousins.

Jalen Nailor was just like Smith-Marsette, a day three draft pick out of the Big Ten. He is called ‘Speedy’ for a reason. A phenomenal deep threat at Michigan State, he recorded over 1,400 receiving yards and 12 touchdowns. He also, like Smith-Marsette, can rush the ball and added 163 yards and a score on the ground.

In his senior season against Rutgers, he had a stat line that should remind Vikings fans of the great Randy Moss. Nailor recorded 221 yards on just five catches and scored three times. He also has some kick return experience but, unlike Smith-Marsette, returned a few punts. Eight of them, to be exact. He recently said that he intends to win the job as a punt returner.

Albert Wilson is another candidate for both jobs, Vikings WR4 and punt returner. The Vikings are his third stop in the NFL after playing for the Chiefs and Dolphins. The veteran recently turned 30 years old and already exceeded his low pre-draft expectations as he went undrafted.

In his seven seasons in the league, he recorded 2,499 receiving yards and 12 touchdowns, and 160 yards rushing. Wilson has experience as a kick returner. While Nailor and Smith-Marsette are best used as deep threats, Wilson is best suited for a role as a slot receiver and on short passes. He’s dangerous after the catch and can be titled as a true yards-after-catch demon.

Olabisi Johnson is the fourth competitor for the role. He was the Vikings WR3 in 2019 and started games in place of the injured Thielen in that season. He also somehow found a way to start over rookie phenom Justin Jefferson in 2020. He’s a fundamentally sound player but lacks the dynamic playmaking ability of the other competitors. He recorded 45 catches, 483 yards, and three touchdowns. In 2021, Johnson missed the season with a torn ACL. He is not as explosive as Wilson, Nailor, and Smith-Marsette, but he is a solid and reliable player, which is a valuable skill set for a backup.

Blake Proehl missed the 2021 season on injured reserve. He also tore his ACL in the last training camp, just like Johnson. Before the unfortunate event, however, the undrafted rookie looked great and earned a lot of praise. If he can do the same in the upcoming training camp, he has an outside chance to clinch a significant role on offense. He doesn’t possess elite physical tools but is a good route runner, has great hands, and plays smart.

Who Will Be Vikings WR4 in Week 4

Ihmir Smith-Marsette is the frontrunner for the job, and he should win it. He has shown his explosiveness in Week 18, and Kevin O’Connell can draw up plays to use his talent. However, it wouldn’t be surprising to see at least three, maybe even four, of the aforementioned candidates included on the 53-man roster, and they all could be used as weapons in the passing game due to different skillsets and a high-volume passing game.

New tills could stop more than £500m in thefts from supermarkets

Why Does Kicking Always Crush the Vikings?