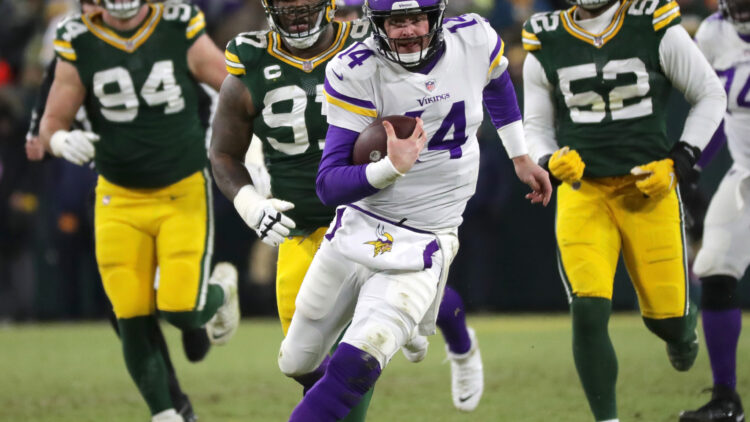 Some people say that the backup quarterback is the second most important position in the sport of football. The backup quarterback, however, is not important at all until he has to play. In 2017, the Eagles proved the value of a backup when Nick Foles took over for the injured Carson Wentz and led the franchise to its first Super Bowl victory.

True iron man signal-callers are rare, even in today’s NFL, with rules that help the QB stay healthy. Only the immortal Tom Brady has played in every game in the last five seasons. Any team that doesn’t employ the greatest of all time must value their backup passer.

Mike Kaye from Profootballnetwork.com ranked the 32 backup quarterbacks. The list starts with some old friends and enemies of the purple team.

At the top of the list ranks Taylor Heinicke. The Vikings signed the undrafted rookie in 2015, and he was on the team for two seasons. In 2020, he played a postseason game against the eventual champions, the Buccaneers. After starter Ryan Fitzpatrick went down in Week 1 of the 2021 season, he earned the starting job and was now replaced by Carson Wentz.

After the second-placed Gardner Minshew, Teddy Bridgewater is third. The Vikings’ 2014 first-rounder was the starter for the franchise until he dislocated his knee just days before the season opener of the 2016 season. Since his magical recovery, he has been a journeyman in the NFL. He is now the backup for Tua Tagovailoa in Miami.

Unlike Teddy, the fourth on the list is not an old friend. Nick Foles is the quarterback who ended the Super Bowl dreams of Vikings fans in January 2018 and turned them into nightmares instead. He then became also a division rival in Chicago.

Case Keenum was the passer who lost to Foles. The Vikings fan favorite has been a journeyman his whole career. Sometimes he gets a chance to play just to become a backup somewhere else in the next season. If something happened to Josh Allen, Keenum would replace him.

The Bears quarterback, Trevor Siemian, is the fourth former Viking in the rankings. He is 21st and was a member of the purple team in 2018.

The 31st-ranked backup quarterback was a liability when he had to play against the Packers in a must-win game in the 2021 season. Granted, the Packers were the much superior team, but a Mannion-led team didn’t even have a puncher’s chance. Only Nate Sudfeld ranked lower than him, and he is technically not even the real backup of Trey Lance, as long as Jimmy Garoppolo is still on the roster.

Mannion has been able to stick in the league for quite some time without much to show for his career. The longtime backup didn’t throw a touchdown in a regular-season game until last season, despite being drafted in 2015. At least he does a solid Jim Sorgi impression with the clipboard.

A backup quarterback of Kirk Cousins, thankfully, didn’t have much to do in the veteran’s career. He started as a backup for Robert Griffin III. Since becoming a starter in 2015, he has played in 111 of 113 games. Cousins missed one game with Covid in 2021 and was once rested in a meaningless Week 17 game.

However, Cousins is a veteran in the league. He doesn’t need a mentor who can explain the coverages to him. He is also good enough not to fear a young backup taking his job. Cousins is the perfect quarterback to develop a young passer behind him.

The fact that Kellen Mond was drafted in the third round of the 2021 draft but can’t beat Mannion for the backup spot is head-scratching. Reports say that Mond gets all chances in Kevin O’Connell’s first training camp to win the backup QB job. If he can’t do that, his career is in jeopardy very early. Mond should win the job because, unlike Mannion, he has potential.

Not only Mond struggles but also the young Packers quarterback Jordan Love. In 2020, Green Bay surprisingly traded up and selected the passer instead of a receiver for Aaron Rodgers. That led to a feud that lasted about two years. Rodgers now finally signed a massive extension and doesn’t threaten to leave anymore.

Love, meanwhile, was trapped in a weird spot. As a first-rounder, he, in theory, should have the talent to start somewhere. He has no chance to replace Rodgers, the back-to-back MVP, anytime soon.

Love is in a weird spot. The former first-round pick was probably over-drafted in 2020, and now he might never see the field again in Green Bay with Aaron Rodgers extended. Love has started just one game, and he offered up a mixed bag. He’s essentially still a projection at this point.

His contract expires after two more seasons. The Packers could even use the fifth-year option to keep him around longer. A trade could be the best outcome for both parties at this point.

Jed McCaleb has 81.5 Million XRP Left, Next Week He May Go Down to Zero