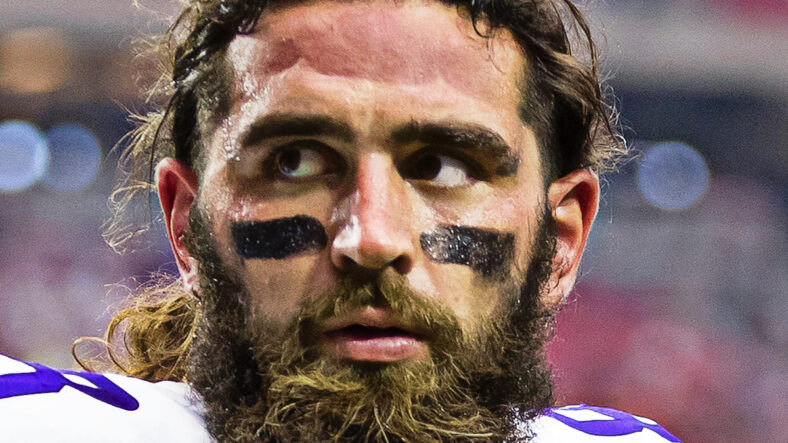 Six Minnesota Vikings agents scattered this offseason, and about 10 others remained unsigned on the open market.

These are the 2021 Vikings players who found new NFL homes.

A little engine that could for the Vikings, Beebe will now try the Texans on for size. Houston has oodles of wide receivers on the summer depth chart, so Beebe will fight to make the 53-man roster.

Beebe was loved by many fans, possessing a mini-Thielen vibe and NFL lineage with his father, Don Beebe. He missed all of the 2021 season due to injury and was not a priority by Kevin O’Connell and Co. to re-sign — evidently.

All told, Beebe had 310 receiving yards in three seasons with the Vikings.

Bower played 97 snaps in three seasons with Mike Zimmer’s Vikings. He was a player the team pivoted to when injuries hit — like a safeguard.

He never made an impact with Minnesota and, like Beebe, will try valiantly to snag a regular season roster spot with the Raiders.

Bower is arguably most famous for attending LSU.

If Garretty Bradbury struggles with pass protection again — and the team doesn’t sign free-agent JC Tretter — the Vikings might regret this one.

Cole fired up a 69.7 grade from Pro Football Focus last year, a heavenly score by Vikings offensive line standards. In March, Cole cashed in a rather lucrative deal with the Steelers, where he’ll likely thrive because, well, they’re the Steelers.

Probably the most noteworthy departure, Conklin was unbelievably productive given the circumstances in 2021. He performed like a true-blue TE1, enough for the Jets to sign on the dotted line for $6+ million per season.

He’ll encounter a crowded house in New York for tight ends, competing against C.J. Uzomah and rookie Jeremy Ruckert. But as the 2021 season showed, if lady-killer Zach Wilson throws the ball anywhere in the vicinity of Conklin, he’ll snatch it.

The 2021 version of Xavier Woods was hot and cold. He wound up with a 66.4 grade from PFF, showcasing a knack for run defense more so than pass coverage.

In Carolina, Woods enters the Baker Mayfield circus after the Panthers traded a fifth-round pick to Cleveland for the passer earlier this week.

And last year, the Panthers defense was damn good. The forecast for this year, though, is mixed among NFL pundits.

Vigil had his best game as a Viking against the Cardinals in 2021 — and now he’ll join them.

When the Vikings signed Jordan Hicks, all linebacker discussions — and perhaps even Anthony Barr’s Vikings career — ended. Eric Kendricks and Hicks will fill the starting linebacking jobs in 2022, with rookie Brian Asamoah presumably mopping up the rest of the LB work.

According to PFF, Vigil was the league’s 13th-worst linebacker last year.

Debevoise Discusses What the ADPPA Means for U.S. Data Regulation

Amazon to create over 4,000 new UK jobs this year, becoming one of the nation’s top employers

The Vikings Top Offensive Performers vs. Bears, per PFF

Vikings Depth Chart Ahead of Week 3 vs. Lions

What the Vikings Do Poorly, the Eagles Do Wonderfully