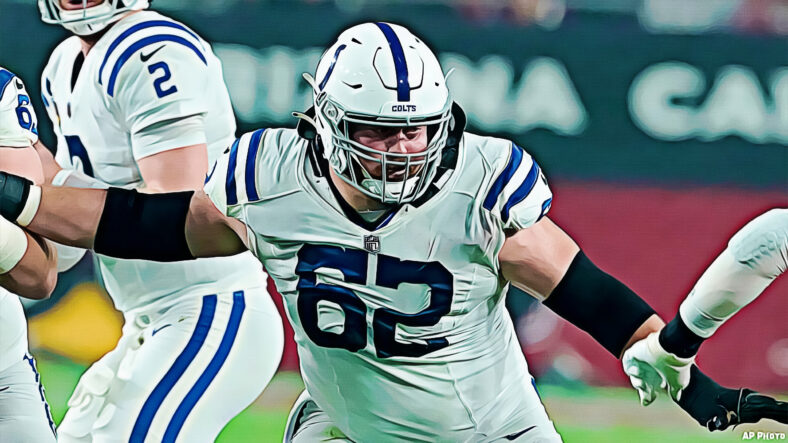 Since Joe Berger left the team after the 2017 season, the Minnesota Vikings have flunked the task of steadying the right guard position.

Half-buttocks solutions were enacted, especially over the last two years, with men like Dakota Dozier, Dru Samia, and Oli Udoh. Dozier was a true reservist player who the Vikings insisted should start in the 2020 season. Samia was mortifying. And Udoh started the 2021 season with competence but succumbed to more penalties than a tax evader.

So, Vikings fans chalked up the futility to coaching staff, at the time led by Mike Zimmer. But Zimmer was canned in January, along with his boss Rick Spielman, ushering in a new era with Kwesi Adofo-Mensah and Kevin O’Connell as the GM-HC duo. Unless the Vikings are beset by an evolving hex, a new coaching staff should, in theory, finally fix the RG spot. That probablity is enhanced as O’Connell and his suborndinates are said to be “offensive-minded.”

So far, with Adofo-Mensah anyway, the proof is in the pudding. The analytics-based executive acquired three potential solutions at right guard, including Jesse Davis, a starting tackle from the Miami Dolphins, Ed Ingram from the 2022 NFL Draft, and Chris Reed, a guard who last played for the Indianapolis Colts.

Davis was ‘the guy” at RG for the Vikings at June’s minicamp. Folks waltzed out of the event in Eagan believing Davis was the frontrunner to win the RG job. We shall see — because he was a tackle in his past South Beach life — and not an overly proficient one.

Ingram hasn’t signed his rookie contract as of mid-July, a slightly concerning development with training camp about one week away. Vikings rookie cornerback Andrew Booth hasn’t signed his deal either, so perhaps these 2nd-Rounders from around the league will get with the program soon. When Ingram does make it official, he really “should” be the starter, as using 2nd-Round draft capital on interior offensive lineman — and then not starting them — is silly.

But what’s the broader plan for Chris Reed, then, if Davis is the leader of the pack and Ingram possesses lofty draft stock?

Depending on how quickly Ingram emerges, Reed might be the best true-blue guard of three contestants. Conversely, he’s probably considered the third of three is faux betting odds to win the RG job for the 2022 Vikings.

This could shake out three ways for Reed, who had a 67.2 score from Pro Football Focus in 2021.

Foremost, if he doesn’t start at RG1, he could serve as one of the best backup guards in the NFL. Hell, that’s what he did with the Colts. It’s just odd that the Vikings, a team with notorious RG comedy — of all 32 teams he could’ve joined — wouldn’t give the man a starting job.

If not a backup guard job for Reed, perhaps he’s the number-one-with-a-bullet contingency plan for Garrett Bradbury at center. Through three seasons, Bradbury has been a wonderful run-blocking center but a clumsy pass-protection asset. He was drafted in the 1st Round of the 2019 NFL Draft, and centers drafted in that territory absolutely must be good at both traits. Bradbury isn’t. Mark that down — if Bradbury is a struggle merchant once again, look for Reed to save the day at center.

Finally — a grimmer forecast — maybe Reed is just “one of those” interesting names signed in free agency who gets cut when 53-man rosters debut. Again, that tale would be crazy as hell because it would seem the Vikings are cutting a good guard after four years of guard misery. The logic there is bizarre, but it remains in ‘to be determined” status.

Reed deserves to play (probably start) somwhere in the NFL. When he signed on the dotted line with Minnesota, he likely thought he was a shoo-in to start for a team with a bad offensive line. Didn’t you?

These must be the problems that teams with “normal” offensive lines ponder — too many good options. You can thank Adofo-Mensah for this pseudo-problem.

Caltrans to Close 2-Mile Stretch of I-8 in Mission Valley Overnight Sunday, Monday

Corner Pass Coverage has been a Mixed Bag for Vikings