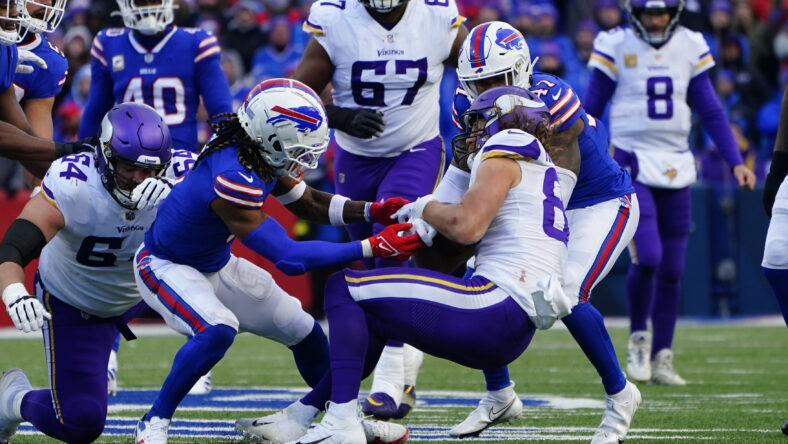 Irv Smith was placed on injured reserve at the start of November, and the Minnesota Vikings somehow improved on offense.

For four consecutive offseasons, the Vikings tight end was forecasted for a “breakout season,” as fans and pundits applauded Smith’s youth and athleticism.

Well, the breakout season never arrived, and Smith will spend most of 2022 on injured reserve, his second straight season battling injury.

Thankfully for the Vikings sake, Smith’s “replacement” in the short and long term has emerged to be everything folks craved from Smith himself. He’s T.J. Hockenson, acquired from the Detroit Lions right before the trade deadline. In many ways, the swap with Detroit was an “in with Hock, out with Smith” transaction, although Smith was not traded to Detroit.

Since getting acquired by the Vikings, Hockenson is the NFL’s third-most targeted TE (8.5 per game), behind only Travis Kelce and Pat Freiermuth since the start of Week 9. The Vikings traded ample draft capital for a commodity — and they’re using the asset to the utmost within the offense. That’s how it’s supposed to work.

The 25-year-old also caught on at a lightning-quick pace, making an impact on the Vikings-Commanders game some five days after joining the roster. In fact, given the close and whirlwind nature of Minnesota’s win over Washington, some folks wondered if winning the game would’ve been possible without Hockenson. Probably not.

Since becoming a Viking, Hockenson has accrued 192 receiving yards on 26 catches for 1 touchdown. His per-game statline spread over a full regular season is what fans craved from Smith. He’s also likely the TE1 of the future, as Smith is in his final contractual year. In March, Minnesota must decide to retain the Alabama alumnus or let him test free agency. Because Hockesnon is now “the guy” at TE1, Smith can probably command more money on the open market from a non-Vikings team.

Still, the 2022 season isn’t over. If Smith’s health trends in the right direction, Minnesota may experience the Hockenson-Smith combo platter in January and perhaps February if the good voodoo continues.

Vikings general manager Kwesi Adofo-Mensah traded a 2nd-Round pick from 2023 and a 2024 3rd-Round pick for Hockenson, a 2023 4th-Round pick, and a conditional 2024 4th-Round pick. The Vikings traded down two rounds next year and one round in 2024 to land Hockenson.

In doing so, they achieved the longstanding vision for Smith — but with a different guy.

Justin Jefferson Said Something in July — and Backed It Up.

The Vikings Top Defensive Performers vs. Bears, per PFF

Vikings Offseason Could Include Moving on from Several Veterans