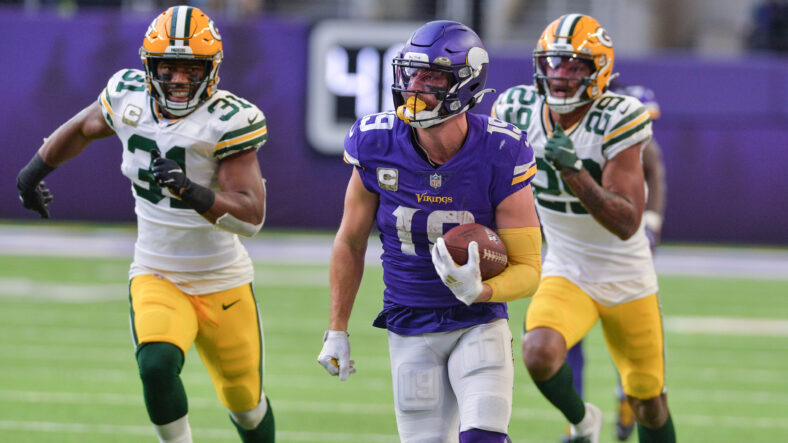 The Minnesota Vikings start the Kevin O’Connell era against the rival Green Bay Packers. Kicking off as an afternoon start from U.S. Bank Stadium, Minnesota entered as 2.5-point underdogs. Here’s how EA Sports’ Madden 23 sees it playing out.

Green Bay got on the board first, scoring seven points in the first quarter. Neither side could get in a groove during the opening salvo, as that was the only scoring to take place. In the second quarter, things shifted substantially. Thirty-one points were hung on the scoreboard as Minnesota put up 17 to the Packers 14.

At halftime, the hometown Vikings found themselves looking at a four-point deficit. Coming out in the second half, Minnesota needed to claw back. Scoring on just a Greg Joseph field goal in the third while allowing another touchdown wasn’t going to do it, however. The Packers added their fifth touchdown of the game in the fourth quarter, and the 35-20 tally was where this one ended.

Aaron Rodgers began his 17th season on a strong note, throwing for 287 yards and two touchdowns. The Vikings signal caller Kirk Cousins wasn’t far behind, tallying 216 yards and two touchdowns of his own. On the ground, it was Aaron Jones looking like the difference maker. His 129 yards on just 18 carries were punctuated by three trips to the end zone. Minnesota handed the ball to Dalvin Cook 17 times for 71 yards, and an additional 11 times for 42 yards came from Alexander Mattison.

On the outside, Sammy Watkins paved the way for the Packers new receiver corps. He posted 96 yards on seven receptions while Randall Cobb hauled in eight and got into the end zone twice. Minnesota was led by Justin Jefferson’s 69 yards on four receptions; he also added a touchdown.

Minnesota never got to Rodgers in this one, recording zero sacks. Kenny Clark and De’Vondre Campbell both took down Kirk Cousins for Green Bay. Minnesota rookies Andrew Booth Jr. and Lewis Cine got on the stat sheet, recording one and three tackles, respectively.

Around the league, the high point total came from the Denver Broncos, who hung 38 points on Russell Wilson’s former squad. Picking up the rear was the New York Jets, who managed just 17 points against the Baltimore Ravens.

Check back next week for Minnesota’s matchup against the Philadelphia Eagles at Lincoln Financial Field.