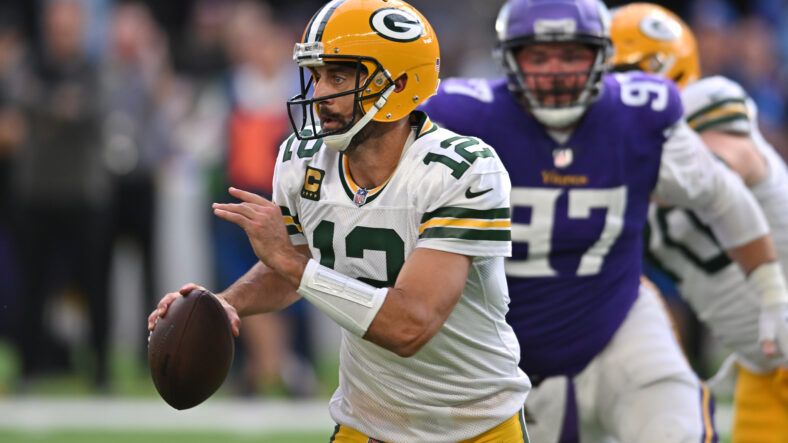 Once the Monday Night Football matchup between the Denver Broncos and Seattle Seahawks is over, Week 1 of the NFL season will be in the books. The early days following the inaugural week of the NFL season are notorious for hot takes and overreactions aplenty. With each of the NFC North teams having played, here are some of the early overreactions, and whether or not we should take them seriously.

Can Justin Fields Carry the Bears?

On Sunday afternoon in Chicago, Justin Fields caught fire during a monsoon. Despite inclement weather conditions, Fields managed to find a rhythm in the second half, flinging passes all over the field and using his legs to extend plays.

Everyone expected the Bears to be one of the worst teams in the NFL this season, but they managed to upset a 49ers team that made the NFC Championship Game last season. Because of that outcome, some optimism suddenly surrounds the Bears squad.

While this was certainly a great win for a young Bears squad, we have to take into account a few things. Firstly, Elijah Mitchell left this game with an injury, and that seemed to throw off the 49ers gameplan offensively since they couldn’t rely on their star RB. Trey Lance wasn’t exactly spectacular in this game either, opening the door for the Bears second half comeback.

Overall, there were some positive signs in this game, but hopes for the Bears to end the season near playoff contention should be tempered.

Is D’Andre Swift a Superstar?

Despite a Detroit Lions 38-35 loss to the Philadelphia Eagles, during which Jared Goff threw a pick-six, D’Andre Swift had a spectacular game and truly was the catalyst for Detroit’s comeback that fell just short. Swift had 15 carries and racked up 144 yards, good for a career high. Swift’s rushing total was the third highest in the league on Sunday, behind only Saquon Barkley and Jonathan Taylor.

Throughout his early career, Swift has had struggles with injuries, and when he’s been on the field, he’s had to share carries with other RBs. Because of that, Swift’s production has been limited, but the talent has always been there. Because of that, it really doesn’t feel like a reaction to call Swift a superstar after running all over one of the best defenses in the NFL.

As long as Swift can stay healthy, 2022 looks like a strong season for Swift, and it should be the first year in which he rushes for 1000 yards. Add in his capabilities as a receiver, and it’s clear that the Lions have a young superstar to build around in the backfield.

Are the Packers in Trouble Without Davante Adams?

The Green Bay Packers offense looked rough in their first game without Davante Adams. Aaron Rodgers threw for just 195 yards, had zero touchdowns, and turned the ball over twice. On top of that, it looked like there were multiple miscommunications between Rodgers and his receivers during the game.

That said, these Week 1 stinkers have somewhat become par for the course with the Packers. In Week 1 games during the Matt LaFleur head coaching tenure, here’s how many points the offense has generated:

Other than the 2020 shootout against the Vikings, Week 1 has been sort of a “feeling out” process for the Packers offense before ultimately making the playoffs in January.

Obviously, not having Davante Adams could extend this process by a few weeks, but Sunday’s loss to the Vikings doesn’t feel that much different than past years. This is evidenced by the fact that Green Bay had multiple chances to score. On the opening play of their first drive, Christian Watson dropped a pass that should have been a 75-yard touchdown. Later on, Green Bay was stopped on 4th and Goal at the one-yard line.

Toss in the fact that Green Bay was missing all three of David Bakhtiari, Elgton Jenkins, and Allen Lazard, and that is just further evidence that this team will be better in future weeks. If Green Bay loses to Chicago next week though, we can certainly start having this conversation.

Do the Vikings Have a Top-10 Pass Defense?

Green Bay may have struggled on offense for a multitude of reasons on Sunday, but we have to give some credit to the Vikings defense. Through Sunday, their pass defense has allowed the 10th-fewest yards per attempt at 5.3. Minnesota’s front seven had Aaron Rodgers running like a chicken with his head cut off all afternoon, and they got to him multiple times, recording four sacks.

That said, could this Vikings defense actually be one of the best in the league? It certainly feels like it. Not only did the defensive backs do an excellent job in coverage, but the EDGE duo of Danielle Hunter and Za’Darius Smith should disrupt passing rhythms all season.

They have a massive test this upcoming Monday night against the Eagles, but if they can hold that offense in check, we need to take this defense seriously. It’s not an overreaction to think they can continue the Week 1 production.

Josh Frey is a Class of 2020 graduate of The College of Idaho. He graduated with a bachelor’s degree in Creative Writing as well as minors in History, Human Biology, and Journalism. When he’s not writing about the NFL, Josh‘s hobbies include training for a marathon, playing video games, and rooting for the Milwaukee Brewers and Bucks. For more of his takes, NFL and otherwise, check out his Twitter account: @Freyed_Chicken

Cardinals Have Ghastly History in Minnesota