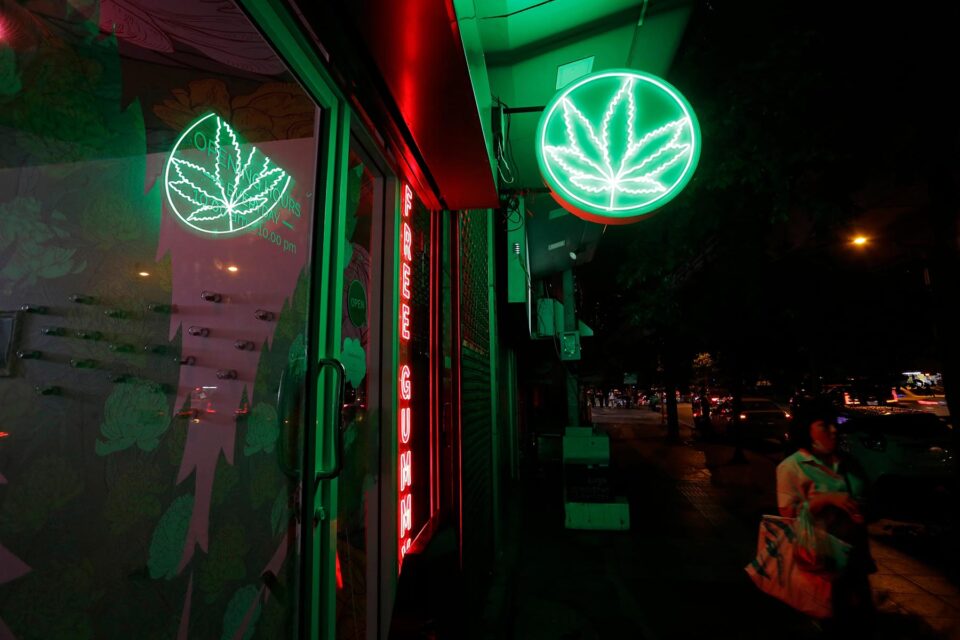 Faced with Thai immigration, I fix my most benign smile, try not to look overly excited about the recent government decision to legalise weed, and I’m waved through. June 9th, 2022 saw cannabis – in all forms – given the green light across Thailand.

No longer are travellers to Thailand required to find a dodgy-but-not-too-dodgy-looking taxi driver to score weed from. The old experience carried its own unique risks of potentially getting robbed or sold chemical indiscretions in the form of MDMA, yaba, china white, or jungle meth. Now, weed is fully available. Everywhere.

Today, a stroll down Bangkok’s once notorious Khaosan Road reveals the industry, while still fledgling, is being embraced by locals, tourists, and foreigners working in Bangkok. There are four main retail choices for those of the herbal persuasion: stalls, carts, shops, and hotels.

Stalls selling Green Crack pre-rolls for B100 (about £2.50) are all over the place. Green Crack appears to be the go-to strain for tailormade joints in Thailand. Other bloodlines are represented by a heavy presence of Girl Scout Cookies, MAC, Bruce Banner, LSD25, and anything with ‘OG’ in the name. There’s a bit of Nepali black hash about, although the lozenge bullet-shaping is always a bit off-putting. The number of yoghurt enemas involved in smuggling hash is apparently very high. That said, it’s B400 (£10) a gram, so it does present an interesting opportunity, but I decide to give one of the pre-rolls a try. After smoking Cambodian schwag for the past three years, the Green Crack really hits. I lie in my hotel bed drifting off to YouTube videos, and only awake after a good 10 hours of sleepy time. Wow, that game show’s still going, huh?

After smoking Cambodian schwag for the past three years, the Green Crack really hits. I lie in my hotel bed drifting off to YouTube videos, and only awake after a good 10 hours of sleepy time

The importation of marijuana remains illegal in Thailand. International shipping is also blocked by US legislation. So, where have all these strains come from? When casually asking at various stalls whether a particular strain is imported, vendors tend to sidestep the question or mumble a response as to strains’ origins. Understandable as no one wants a night in the Bangkok Hilton, or to face a tsunami of legislative paperwork. The bolder shop assistants will cheerfully inform you that their bud is shipped directly from California but I’m still on the hunt for local outdoor weed. Coming to Thailand and smoking imported flower feels similar to arriving in The Land of Smiles and just eating Maccies.

The biggest ‘problem’ faced by marijuana tourists is that there’s simply too much choice. With many operations selling up to thirty strains, it’s causing cognitive bias of meltdown proportions; you can almost smell tourist synapses fizzing away, scented similar to that of a ragged-out Scalextric car. Marijuana-bro culture permeates the Bangkok scene: muscle shirts sporting bold prints, chest bumps, and trap beats bleeding from high-end speakers. It’s also a sativa-dominant market with the majority of pure-bred indicas hidden away by top-shelf obscurity.

The next day, I walk into a ‘weed shop’ – sensibly dodging the four-syllable naming convention of ‘dispensary’ – I’m attracted by the cocktails and order a Paloma420: Super strength THC-infused tequila. What could possibly go wrong? After three hours of wandering around trying to find the answer to such questions as if Toto from Wizard of Oz could speak, whether tarantula milkers use thimbles as pails and the potential for cows as viable modes of mass transport, I stumble across a place selling edibles.

I snap up a cookie (B200/£5) and a cashew nut brownie (B200/£6.25). Being a sucker for weed brownies, this one goes down the hatch first washed down with a Thai espresso. The caffeine is needed but it’s making me a bit edgy. Luckily, it plays out just fine and I’m soon riding the wave of my first legal edible in Thailand. “Wow, this place has changed”, I think to myself.

Thailand’s slowly but purposefully walking away from the somewhat lowly association of being “The gateway to southeast Asia”. The Kingdom now stands closer to that of a financial powerhouse in its own right, fully equipped with the most solid economic model in the region. It’s a country operating unfettered compared to legislation seen in new world industries and also has a more – in every positive sense of the word – organic approach to cannabis retail.

As US ganja megabrand Cookies looks to expand into Thailand, is it poised to become the first multinational chain of shops? Yes, as long as cannabis products are sourced locally. Cookies faced a bump in the green brick road when the original business plan to sidestep US import restrictions and ship from Canada and/or Israel was crushed with reinforcement that all flower be sourced locally. Seems sensible, but where does this money go? How much are the farmers getting paid? Locally sourced marijuana advocate, Kitty Chopaka speaking on behalf of boutique bud shop Chopaka is happy to elaborate, telling me “Our growers receive between 35-60% of each sale. As our process for inventory intake is quite different, we don’t have a set purchase price.

“Every farm has different levels of expense with smaller farms experiencing a greater rate of sale than large farms. We’re more concerned regarding how well the product smokes and may choose to not purchase inventory if it’s not up to our standard. We also give a 5% commission from our sale price to the growers on top of the purchase price.

“The biggest difficulty faced by the industry is that the consumer is not educated enough in cannabis and cannabis use. If imported cannabis wasn’t everywhere, there would be less anti-cannabis sentiment from people and reduced public harm – it may even lessen the complaints regarding price. People really need to be educated, as with education many risks can be mitigated.”

Thailand is a country that has cleaned up its act. The scourge of topless, bicep-flexing tourists has made way for more family-orientated travellers – complete with greater economies. While “The Amsterdam of Asia” monicker doesn’t quite chime right – the parallels are obvious, if not accurate. The country is moving away from Danny Boyle’s representation of Thailand in The Beach (worth a rewatch, it’s kinda cute looking back on it) and clearing its own unique cultural and economic path.

Half the fun of buying weed in Thailand was that it used to be dead cheap. Sure, you had to run the gauntlet of dealing with Thai gangsters but we were most definitely enjoying local marijuana

Whether marijuana price fixing simply comes with the turf of a nascent industry blossoming overnight remains to be seen. A quick back-and-forth at one cart over the price of Gorilla Glue per gram saw a vendor drop prices by over 30%, indicating that high-end bud is still enjoying a sizeable margin. But, aren’t they missing the point? Half the fun of buying weed in Thailand was that it used to be dead cheap. Sure, you had to run the gauntlet of dealing with Thai gangsters but we were most definitely enjoying local marijuana, sourced from if not within Thailand, Laos. Now it’s common to see strains topping B950/£23.75 per gram.

We’ve come a long way since a DEA agent described Thai Stick as “the Cuban cigar of the marijuana world” in 1967. How would the same DEA agent report on the countless strains available on the Bangkok streets today? Probably along the lines of “frickin awesome!”, if, of course, he could muster the ability to speak.

Is climate change shifting magic mushroom season in the UK?

Can medical cannabis be prescribed for fibromyalgia in the UK?