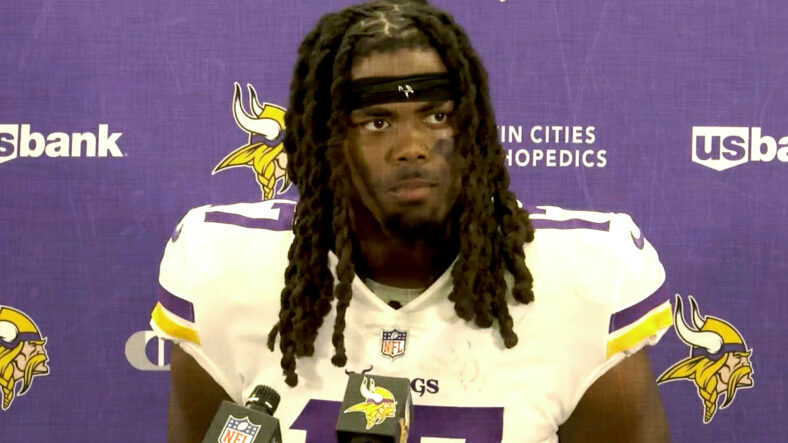 Almost out of thin air, Minnesota Vikings wide receiver K.J. Osborn bourgeoned from a non-factor on offense in his rookie season to the team’s undisputed WR3 in 2021.

Osborn’s climb up the Vikings depth was as unforeseen as it was impressive. He fumbled a key punt in 2020, leaving Vikings fans with little hope that the Miami alumnus would emerge in his sophomore season. But folks were wrong.

Immediately in 2021, it was obvious Osborn just needed targets in the Vikings offense that were not provided in 2020. He ended up grabbing 50 receptions for 655 yards and seven touchdowns. The production was the best by a Vikings wide receiver not named Jefferson, Thielen, or Diggs in years.

Now, Osborn has his mind set on winning the NFC North — and a Super Bowl.

Osborn was a guest on The Zach Gelb Show via CBS Sports Radio, and Gelb asked Osborn “what he would say to a guy like him” who believes the Green Bay Packers will again win the NFC North.

The Vikings pass-catcher swiftly replied, “Get your popcorn ready.”

While Osborn stopped short of guaranteeing his team’s command of the division, he continued, “I feel like — I’ve said this before in interviews — every team’s goal in the NFL should be to win the Super Bowl. I mean, I feel like that’s the only thing we’re training for. You work so hard. You sacrifice so much, and every team should have only one goal.”

You can listen to the whole interview here:

Minnesota ran 69% of offensive plays with three wide receivers on the field last season, the seventh-fewest in the NFL. On the other hand, the Los Angeles Rams, the previous employer of the Vikings new head coach, had three wideouts on the field 94% of the time — the most in the NFL. In that regard, Osborn should experience an uptick in targets.

Osborn will also have to navigate his third season while tight end Irv Smith Jr. returns. The fourth-year TE missed all of 2021 with a torn meniscus, benefitting Osborn a smidgen from a targets perspective. Osborn got more work because Smith Jr. was out, especially because the Mike Zimmer version of the Vikings didn’t fancy three-WR sets.

And as the Vikings attempt to steal the division for the Packers, a team that has won the NFC North thrice consecutively, Green Bay must adjust to life without Davante Adams. The Packers wideout was traded to the Las Vegas Raiders in March for draft picks that would turn into linebacker Quay Walker and wide receiver Christian Watson.

Osborn will get an early crack at dethroning the Packers as Minnesota hosts Green Bay in Week 1 at U.S. Bank Stadium. The Packers are favored by two points.

Marketing to Doctors and Physicians

The Vikings Top Offensive Performers vs. Cardinals, per PFF

No D.J. Wonnum for the Vikings This Weekend