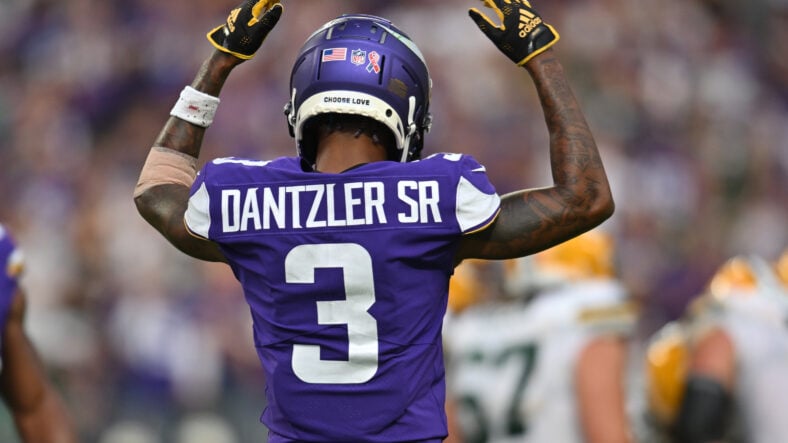 The Vikings are at the top of the NFC North with a 4-1 record. The victory against the Bears looked like a blowout at first, but the Bears somehow came back into the game, so it required some heroics from offense and defense to save the day. A few players didn’t have their best days, but others played a fantastic game.

The third-year cornerback battled some inconsistencies and struggled at times in his young career. It’s still hard to believe that he was behind Beshaud Breeland on the depth chart. His Vikings career was in jeopardy early in the 2021 season because he landed in Mike Zimmer’s doghouse for unknown reasons. Dantzler is still just 24 years old and is slowly getting back to the level of his great performances of his rookie year in 2020.

He also struggled at times at the beginning of the season and allowed a lot of catches because he didn’t play with a lot of aggressiveness. However, Dantzler is becoming more confident, and it shows in his game film. At the end of the game, Dantzler missed a tackle but didn’t give up on the play, caught former Vikings Ihmir Smith-Marsette, and stripped the ball. The play clinched the win.

The threat of losing his spot to one of the rookies, Akayleb Evans and Andrew Booth Jr., doesn’t look imminent.

A weekly contributor in the winner’s list, Darrisaw is playing up to his preseason hype. He drew comparisons to star left tackle Trent Williams, and he’s looking eerily similar. Throughout the first five games, the second-year player simply bullies opposing edge rushers. Even elite players like Bears’ Robert Quinn don’t stand a chance against the former Virginia Tech standout. Quinn regularly found himself lying on the ground.

Darrisaw’s quickness and strength are easy to spot. PFF ranks him third in the NFL among all offensive tackles throughout the first five games. He didn’t allow a single pressure in the passing game and is man-handling and neutralizing his opponents. Darrisaw played in 17 career games, so it’s possible that he can still get better.

His neighbor on the offensive line, Ezra Cleveland, deserves some praise, too. He played a nearly flawless game and kept his quarterback clean while handling his business in the running game.

The same can be said about center Garrett Bradbury. Fans called for his head after three disappointing seasons, and he probably played his best game in a Vikings uniform. He looked like one of the best centers in the league, showcasing his athleticism and looking a lot better at anchoring against strong defenders. Just like Darrisaw and Cleveland, he didn’t allow a single pressure.

Kirk Cousins is still not playing at the same level as he did in 2021, but his late-game heroics are keeping the Vikings at the top of the NFC North. He completed his first 17 passes, breaking a franchise record from 1979 from Tommy Kramer. Like in most years, Cousins is slowly heating up in October.

Justin Jefferson is unstoppable. He is leading the league in receiving yards. Despite the struggles in Weeks 2 and 3, JJ is at the top of the list and is completely unstoppable in single coverage. That’s why it’s highly surprising that opposing defensive coordinators still try to do that.

Edge rusher D.J. Wonnum is making the best out of his opportunities. He played about half of the snaps and still pressured Justin Fields five times. In the last couple of seasons, he has shown that he is not quite a starting-caliber player, but as a rotational rusher in his third season, he’s looking like a fantastic player.

While the Vikings pulled off the victory and the Bears scored only 22 points, that’s too much considering the lack of explosiveness of the Bears offense. The unit came into Sunday’s game with an average of 16 points scored, and the Vikings somehow let the offense look good.

Quarterback Justin Fields heavily struggled in the passing game at the start of the season but completed 15 of 21 throws for 208 yards and a touchdown. He also added 47 yards on the ground. At least the rushing defense looked good against David Montgomery.

The Vikings went up against Andy Dalton the week before, and he looked like prime Dalton. Jared Goff looked like a world-beater in Week 3, and Jalen Hurts was unstoppable in Week 2. The Vikings defense faced some bad offenses and still looks suspect at best.

That’s concerning because the Miami Dolphins are the next opponent, and Tyreek Hill and Jaylen Waddle look sensational in Mike McDaniel’s offense. Defensive coordinator Ed Donatell and his defense will play against some top offensive teams and have to stop them to be competitive. The players are talented, and Donatell has to put them in a favorable position to succeed.

The kicker currently doesn’t play up to his high expectations that were built in training camp and the preseason. He regularly hit 60-yarders in practice and also made a 58-yarder in the preseason. That kick would’ve been the longest in Vikings history.

Joseph is reminding Vikings fans of struggling kickers of the past. He missed another kick from 53 yards and struggles from that distance. However, it’s not easy to make those long-distance attempts. It will be interesting to see if that’s a trend or just a bad stretch. At the very least, it’s something to monitor.

Joseph wasn’t the only specialist with a subpar day. Wright had just one punt, and it traveled 15 yards. That’s unacceptable and is comparable to a turnover. He has the ability to hit huge punts but has to be more consistent.

The Interesting State of the Vikings thru 15 Weeks

Ndamukong Suh to Vikings Chatter Isn’t Over Yet

The Weakest Spot on the Vikings Current Roster