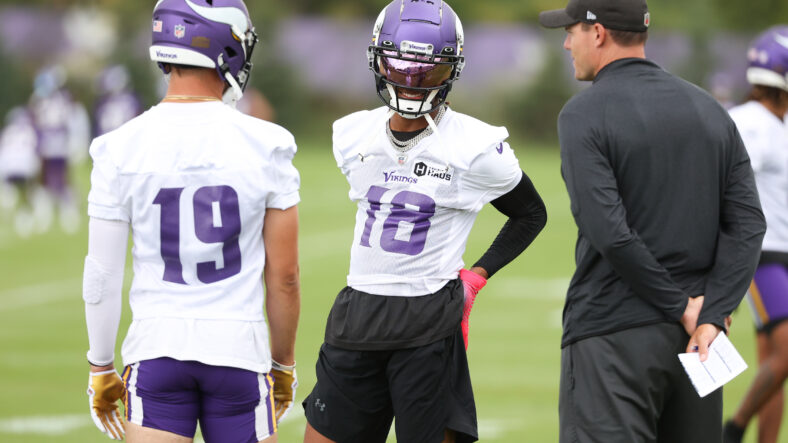 Despite starting slow in both halves, the Vikings pulled off a comeback win against the Detroit Lions. The scoreboard showed a 28-24 after the final whistle blew. Kevin O’Connell’s tenure as head coach of the Minnesota Vikings starts with a 2-1 record, including two wins against divisional opponents. There are multiple things we can take away from the game.

Offense and Defense Are Clutch

Both sides of the ball struggled at times but stepped up when they had to. The defense looked like swiss cheese in the first two Lions scoring drives. However, they forced multiple turnovers on downs, including one deep in the fourth quarter with just 3:35 to go. Ed Donatell’s defense also stopped the Lions at the Vikings’ 37-yard line, forcing a long field goal with just over a minute left. Another first down would’ve put the game out of reach. Instead, Seibert missed the field goal.

Because the defense held up, Kirk Cousins and his unit started the drive in great field position and just a three-point deficit. The drive started at 1:10 on the clock. Cousins found K.J. Osborn twice for 28 yards each time and the touchdown on a blown coverage. After years of bad defenses at the end of games and incapable offenses of moving the ball, Week 3 was a nice change.

Adam Thielen Is Still on the Team

It took him a couple of games, but Adam Thielen had his breakout game. He has been extremely reliable since his breakout campaign in 2016. Through the first two games of the season, however, Thielen only caught seven passes and was not a huge factor. He caught six passes for 61 yards and his first touchdown of the season.

One of the catches converted a fourth down and another one a third down on a drive that ended in a touchdown. Opponents focus solely on Justin Jefferson, and Thielen has to step up and take advantage of the lack of attention.

All the talk in the offseason was directed at the passing game. O’Connell joined from the pass-happy Super Bowl champions Los Angeles Rams, so his offense is mostly passing the ball. However, in the win over the Lions, the running game was the offense’s engine. The Vikings had 123 rushing yards, despite trailing for significant parts of the game and having to throw.

Dalvin Cook had considerable success with 96 yards and a touchdown on 17 attempts. Alexander Mattison, who replaced Cook after his injury, added another 28 yards and a score. The passing offense struggled, and to limit the impact of those struggles, the Vikings must keep the running game going. It’s extremely hard to commit to slowing down Justin Jefferson and the aerial attack and still having enough people in the box to stop Cook. The versatility of the offense is paramount.

The Vikings’ offensive line did its job for most of the day. Cousins was pressured a few times but primarily on blitzes. Left tackle Christian Darrisaw played an outstanding game and is slowly becoming one of the best blind-side protectors in the NFL. Garrett Bradbury turned from a liability into a solid player in the middle of the line.

Guard Ezra Cleveland is the best Vikings guard in years, and Brian O’Neill is an excellent veteran on the right side. He’s always a consistent player. The line provided Cook with good holes in the running game, but also Cousins had time to stand in the pocket to scan the field.

The Vikings came into the season with a lot of uncertainties. One thing, however, was certain — Justin Jefferson’s stardom. In Week 1, he recorded a career-high 184 receiving yards against the Packers, and folks were already calculating how much more he needed for various records. In Week 2, he struggled against Darius Slay and a plethora of double teams. The Lions did the same thing. Jefferson is playing against double teams on most plays of the game.

He recorded just 62 yards in the last two games combined, the lowest total of his career in a two-game stretch. The Vikings must find ways to get the ball into the hands of their most dynamic players on offense, regardless of coverage. He’s too good just to be utilized as a decoy.

Long-time starting safety Harrison Smith missed the game against the Lions with an injury, and most expected Lewis Cine to replace him. He cost a first-round pick and was obviously the next man up. The Vikings coaching staff had other plans. Despite saying that both Metellus and Cine would play, the only one of the two to get snaps on defense was Metellus. During the game, skeptics saw why.

He played a marvelous game. Metellus recorded nine tackles and intercepted Jared Goff to seal the victory in the final minute. He won’t overtake anyone of Smith and Bynum, and Cine will likely usurp his spot soon because he’s more talented, but Metellus showed why he’s on an NFL roster and may have even earned a more prominent role.