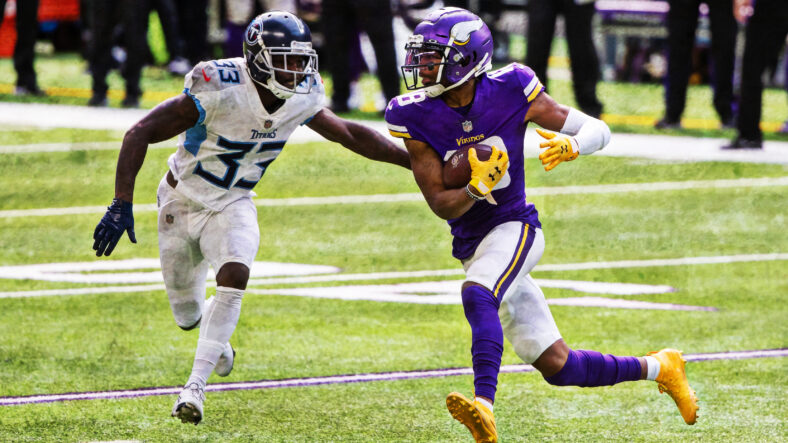 The Minnesota Vikings have a handful of “old” starters — Adam Thielen, Kirk Cousins, Harrison Smith, Eric Kendricks, Patrick Peterson — and the 14th-best young core under the age of 25, according to ESPN.

The sports media giant ranked all teams by under-age-25 personnel, and Minnesota was classified as slightly better than average.

When ESPN concocted the same ratings two years ago, the Vikings ranked 30th — or third-worst — in the NFL, so the addition of Justin Jefferson evidently rejuvenated everything. Interestingly, the specific names referenced by author Scott Spratt were Jefferson and Christian Darrisaw (LT), who Spratt called “blue chip” talents. Some of the teams at the top of the list had five or six men under the age of 25 coined blue chip.

Spratt predictably and specifically identified Jefferson in the analysis, “Fortunately for the competitive half of Adofo-Mensah’s plan, the Vikings already hit on some recent premium draft picks, none more decisively than Jefferson. The receiver has rare versatility to play in the slot and out wide and excel in routes at every level of the field.”

Darrisaw, too, made headlines in the last week, as the Vikings coaching staff has likened the second-year tackle to Trent Williams, a future Hall of Famer on the San Francisco 49ers roster. The Virginia Tech alumnus appears to have already taken a sophomore leap per feedback from training camp.

While ESPN only called out Jefferson and Darrisaw, the Vikings employ other notable under-25 talents as well:

Although, in ESPN’s defense, none of those players have achieved “blue chip” status.

On top of the 14th-best group of under-25 personnel, the Vikings also embark on a new season with a young head coach. Minnesota hired Kevin O’Connell in February for a change of pace, and he’s the second-youngest coach in the business, behind his former boss, Sean McVay. The Vikings hope O’Connell can shove the team into the postseason like the former coaching staff could not in that two years. And a lot rides on O’Connell because Minnesota’s roster is largely the same compared to last year.

ESPN’s top teams per under-25 personnel?

Keys to a Vikings Win over Eagles on Monday Night Football

Explained: The Immediate Fallout from Vikings First Loss of 2022