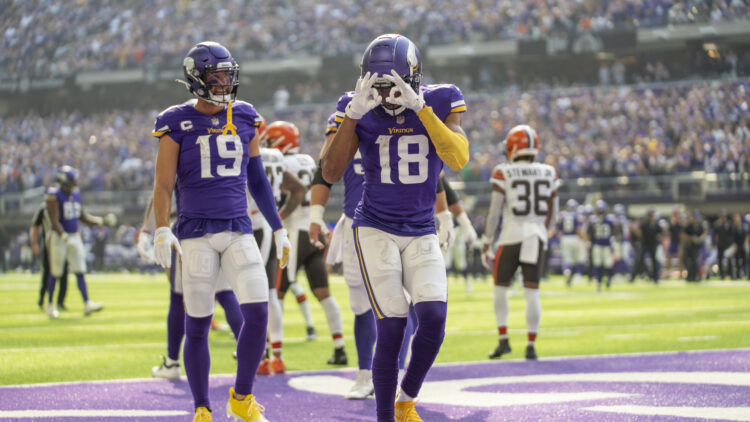 The object of the game of football is to score more points than the opposing team. The best way to do that is by scoring touchdowns. Sometimes that can come from an explosive long-distance play, but more often than not, it will be the result of a drive down the field, and a team will then look for a score once they are in the red zone.

The teams who can force the ball into the endzone for a touchdown rather than settle for field goals. After all, six points are better than three.

Justin Jefferson and Adam Thielen are amongst the best wide receiver duos in the NFL. Coming into his third season, Jefferson is knocking on the door of being the number one receiver in the league. Meanwhile, now fast approaching 32 years of age, Thielen might not be the same player as 4/5 years ago when he was at the peak of his power,s but with 24 touchdowns in just 28 games over the last two seasons, he has become more prolific at scoring touchdowns.

Pro Football Focus names the Vikings duo as the second and sixth best wide receivers in the red zone for the 2021 season. It was Thielen who was named second with a receiving grade in the red zone of 84.3.

PFF had this to say:

Thielen led the top-25 graded receivers by catching 86.7% of his 15 red-zone targets. He also found the end zone nine times and was among 10 players who caught 100.0% of their catchable targets.

I don’t foresee any significant drop in Thielen’s ability to get open on shorter routes and make clutch catches. He will be just as dangerous in the red zone this season. Meanwhile, Jefferson came in sixth with a receiving grade in the red zone of 77.6.

PFF had this to say:

The former LSU man was clearly good, but it is one of the areas he can still improve as he searches to become the best wide receiver in the league — a goal he has his eyes set on.

The Vikings arguably have the best red zone duo in the league. Only new teammates in Las Vegas, Davante Adams and Hunter Renfrow, challenge using PFF’s metrics. They come in 5th and 7th place, respectively. The good news for the Vikings is the red zone threat doesn’t end with Jefferson and Thielen.

In Minnesota, they have one of the best running backs in the league in Dalvin Cook, who’s coming off the back of a disappointing scoring season by his standards, with only six touchdowns after being comfortably into double figures in the previous two. I expect another big season from the Vikings lead back. With the possibility of less reliance on the run game, I believe it will free up more space for Cook to operate. In space, Cook is as dangerous of a player as you are likely to see.

Finally, we have the returning Irv Smith, whose predicted breakout season last year was scuppered by injury. He finished the 2020 season strong and will give the Vikings another big weapon down in the red zone — an athletic pass-catching tight end that has only scratched the surface of his potential so far.

The Vikings are blessed with a variety of offensive weapons which can make big explosive plays as well as produce in the red zone. If Kirk Cousins, with the help of his offensive line, can get the ball to them with regularity, the Vikings will be an exciting team to watch.