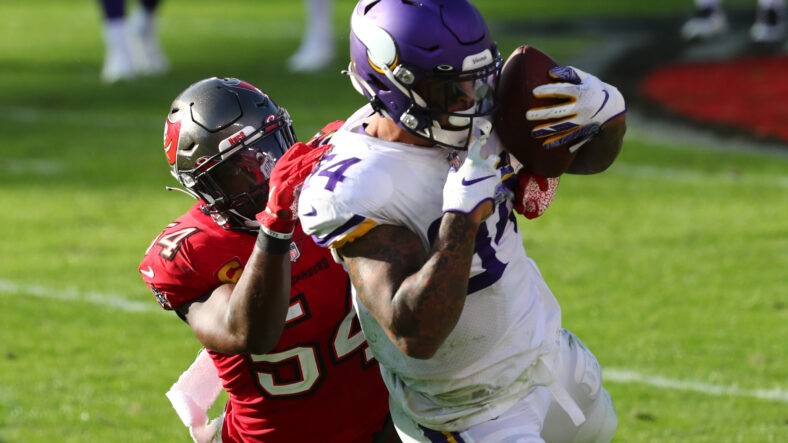 For players, the last year of their contract is an important one.

Specifically, the final year of the rookie contract is possibly the most important season in a player’s career. They have to play well to get another contract, especially after the rookie deal is over. If they don’t play well and therefore don’t get extended or picked up by another team, their career could be over soon, but if they perform at a high level, they can set up their family for generations. The tight end of the Vikings, a former second-round pick, enters the final year of his contract.

Smith is a complicated case. He is talented, and his athleticism is exactly what teams want in a tight end. However, after three seasons, he is still considered a potentially good player more than already having the production to show for it, but the talent is undoubtedly there.

In 2019, Rick Spielman selected the tight end from Alabama in the second round. At the time a surprise move because veteran Kyle Rudolph was still on the roster. Rudolph did not only stay on the team, but he even signed an extension right after the draft.

Smith was the backup for Rudolph. It helped him that the Vikings ran a lot of sets with two tight ends, so he still got to see a lot of action, but he had to share the targets with the veteran. He recorded 36 catches for 311 yards and two touchdowns as a rookie. 8.6 yards per catch is a really low number, considering his athleticism. In his second year, Smith finished with 365 yards on 30 receptions, which equals 12.2 yards per catch. His touchdown number improved to 5.

If a team invests an early-round pick for a player at his position, they expect more than 300 yards per season. Rudolph left in free agency, and it was supposed to be the Irv Smith show. However, he injured his meniscus before the season started and missed the full year — a disappointing development for the young player.

Tyler Conklin replaced him and did a marvelous job. The tight end out of Central Michigan is not the athlete Smith is but still managed to catch 61 passes for 593 yards and three touchdowns. With Smith’s athleticism, it is fun to imagine what he could do in the same role. Conklin played at such a high level that he signed a three-year contract with the Jets in free agency for more than $20 million.

Now, he enters the final year of his rookie contract. Whether he gets another deal from the Vikings depends on his performance in 2022. Tight ends in the NFL recently got paid, like the Browns’ David Njoku, who agreed to a massive extension a few days ago.

Smith will get his chance to be the top receiver of the tight end position group, as he doesn’t face any competition. Johnny Mundt was mainly a blocking tight end when he played for the Rams, just like Ben Ellefson. Zach Davidson, the 2021 rookie, and Nick Muse, the 2022 seventh-rounder, are competing for roster spots and not for targets with the talented Smith.

Very important for the Vikings will be Smith’s run blocking. He is very capable in that department.

Vikings Have Great Surrounding For the Tight End

In Smith’s case, the calculation is an easy one, as he probably either plays well and gets extended, or he is looking for a new team next offseason. If he can stay healthy and have his breakout season, it will help the Vikings a lot in the upcoming season. He’ll have some space to work within an offense next to Justin Jefferson, Adam Thielen, and Dalvin Cook. Kirk Cousins had success in Washington when he targeted his former teammate, Jordan Reed, who was another fast and athletic tight end.

Smith appears to be fully healthy and could make a big difference in the Vikings’ offense in 2022. The tight end certainly has the potential to receive a big contract extension from the Vikings next offseason, but his talent has to translate to the field in the upcoming season.

Janik Eckardt is a football fan with a fable for numbers and stats. He chose the Vikings as his favorite team, despite Christian Ponder being the quarterback at the time. He is a walking soccer encyclopedia and Classic rock is his music genre of choice. Arguing about the Vikings on Twitter is one of his favorite things to do. Follow him on Twitter if you like the Vikings: @JanikEckardt

Nollywood Star, Chidi Mokeme Attacked By Suspected Kidnappers On His Way To The Airport – Celebrity Tell

Kirk Cousins Among Those Impressed by Vikings Defense