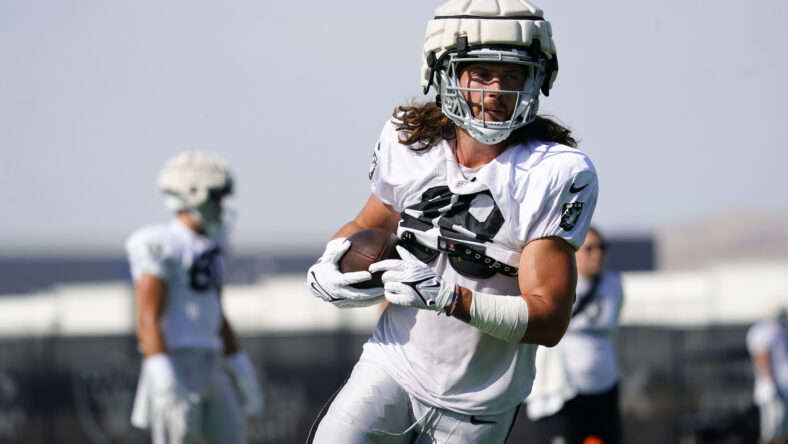 The Vikings signed Hollister on September 27th, so the journeyman pass-catcher lasted about six weeks. TE3 Ben Ellefson is returning to the Vikings active roster from injured reserve, creating a short tenure for Hollister.

To date, Hollister has spent time with the New England Patriots, Seattle Seahawks, Buffalo Bills, Jacksonville Jaguars, Raiders, Vikings — and now Raiders again. The Raiders employed Hollister during the summer before the Vikings scooped him in September.

Hollister played one offensive snap and 17 special teams snaps in Minnesota inside two games. It is unclear if he’ll have a prominent role amid his return to Las Vegas.

Last week, the Vikings traded with the Detroit Lions for T.J. Hockenson, also a tight end. And with his rise to power, plus Ellefson’s return, Hollister’s importance diminished with the Vikings.

Undrafted from Wyoming in 2017, Hollister joined Tom Brady’s dynastic team out of the gate and experienced winning football. But he wasn’t utilized too much with the Patriots and later jaunted to Seattle. With the Seahawks, Hollister took off, to an extent, playing 68% of all Seahawks offensive snaps in 2019. He was a part of “those” Seattle teams that seemed to beat the Vikings annually. The 28-year-old even won a Super Bowl in 2018 with the Patriots, although he was on injured reserve.

After the 2019 season, Seattle minimized his role, and Hollister has bounced around several times. In his career, he’s grabbed 83 receptions for 707 yards and 7 touchdowns on 129 targets.

Keys for the Vikings to Beat Eagles

The Vikings 2022 Defense by the Numbers: After Week 7