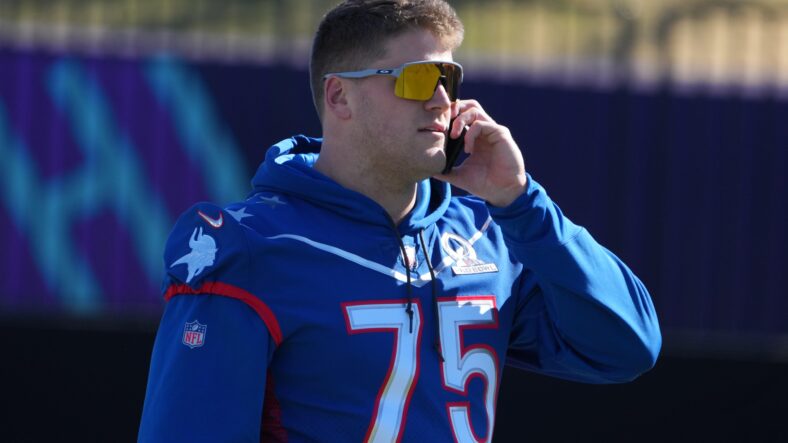 If the Minnesota Vikings starting offensive line projection holds up, the homegrown bunch will be a testament to early-round draft planning.

After an impressive preseason showing and effectuation of 2nd-Round draft stock, rookie Ed Ingram is trending to start at right guard in September. And he’s the last piece of the draft puzzle for Minnesota.

This is the Vikings projected starting offensive line, with draft details:

So, while many Vikings enthusiasts lament the team’s offensive in recent years — rightfully so — the woes aren’t for lack of planning. Minnesota has struggled ad nauseam to nail down the pass-protecting side of operations but has managed to plow lanes for running backs with relative ease.

With the page turned on Minnesota’s 2014-2019 coaching staff, a new group will take a stab at correcting the troublesome offensive trenches. The Vikings hired an “offense-first” coaching staff in February, so if the bottom-tier pass-protection mark persists, it will have meant that back-to-back coaching staffs couldn’t “figure it out.”

For now, the center position is the one looming question mark. Darrisaw, Cleveland, Ingram, and O’Neill are undeniably trending up, but Bradbury is still a maybe. Minnesota spent unusually high draft capital on the North Carolina State alumnus in 2019, but his performance in the last three years has not matched the investment. That’s why Bradbury is amid a training camp and preseason battle for his own job, side-eyeing Chris Reed, a free agent from the Indianapolis Colts, who could sneak in the starting lineup at center.

If Bradbury somehow stabilizes, though, the Vikings will march into Week 1 versus the Green Bay Packers with a totally organic OL fivesome, plucked from the last five NFL drafts with early draft picks.

Jaire Alexander Did the Thing in Week 17

A Couple of Future Hall of Famers Are Flirting in Buffalo