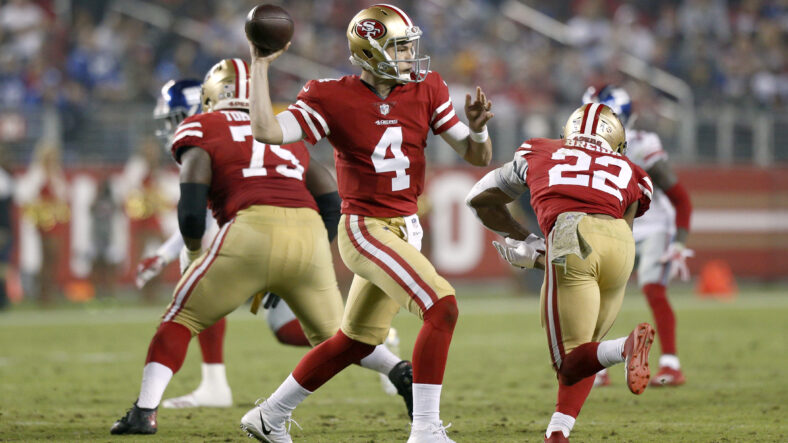 After an intense couple of days of joint practices with the 49ers followed by a dud of a preseason game with starters sitting out, it’s decision week for the Vikings as they ponder the upcoming final cuts.

The roster will be trimmed to 53 active players plus up to 16 practice-squaders next Tuesday, and Thursday’s scrimmage/simulated game followed by Saturday’s preseason finale (thankfully) in Denver will play a significant role for the bubble players as Coach Kevin O’Connell and GM Kwesi Adofo-Mensah finalize their first roster in their new positions.

As for the battles for starting spots and the No. 2 quarterback job leading up to the opener with the Packers on September 11, things are basically decided.

Let’s start with the QBs since they’re most visible, even though it’s probably less critical here compared to many other teams, considering Kirk Cousins’ great durability (unless Covid bites him again). Barring something unforeseen happening, such as Kellen Mond throwing four TD passes and no picks in Denver or trade pickup Nick Mullens not panning out, I see the Vikings going with Mullens, cutting Sean Mannion, and trying to get Mond to the practice squad if he clears waivers.

The training camp and preseason game performances of Mond and Mannion have not been good enough to inspire O’Connell’s confidence. It looked reasonably good for Mond when he threw two TD passes against the Raiders, but that was offset by his rough game with no points and two interceptions against the 49ers. He didn’t use his legs to escape the Niners pass rush, and the interception into double coverage late in the game was an awful decision and telegraphed throw. Mond also was hurt by a couple of big drops. He’s got some talent, but he’s not ready to beat a tough defense like the 49ers (even with many of their starters out).

We’ve seen enough of Mannion to know he’s got a decent arm but no mobility, and he’s just not good enough (prime example was last January’s poor performance in the 37-10 loss to the Packers at Lambeau when Cousins was out with Covid).

Mullens looked good against the Vikings in the preseason opener, completing 7 of 9 for 94 yards and 1 TD. Along with his 17 career starts, that was enough to convince the Vikings brass to send a conditional seventh-round pick in 2024 to the Raiders.

“My confidence level is high in Nick,” O’Connell said. “I don’t worry one bit about him getting ready to go from the standpoint of knowing our offense and what we’re going to try to do against Green Bay.” Those aren’t encouraging words to Mond and Mannion.

As for the other open position battles entering training camp, here’s my view:

1.Cornerback opposite Patrick Peterson: I see Cam Dantzler starting Week 1 over Booth, who is now nursing an ankle injury (O’Connell expects him back for the opener). Dantzler has had a good camp and is talented, but with visions of Dantzler’s terrible game-ending play in Detroit last season, Aaron Rodgers will be going after him early and often on September 11, so we’ll quickly see if Dantzler is really starter-worthy or if O’Connell and defensive coordinator Ed Donatell make a quick move to Booth who is physical and athletic.

2. Safety opposite Harrison Smith: Cam Bynum is solid and appears to have won this job to start the season. I like the speed and physicality of first-rounder Lewis Cine, and he’ll eventually become a starter, but for now, he’ll be playing as an extra DB in dime coverage and have a big role on special teams.

3. Right guard: This is a close call between vet Jesse Davis who has 72 career starts but missed a fair amount of practice time with knee issues, and rookie Ed Ingram who has looked good in run blocking and will improve as a pass protector. This will be Ingram’s job eventually and maybe early in the season, but I think in Week 1 against a stout Packers D, Davis will get the start.

There is a lot of competition for backup roles in several positions. Ihmir Smith-Marsette and Bisi Johnson seem to have earned the No. 4 and 5 receiver spots, with rookie Jalen Nailor the likely No. 6. Special teams play will impact who makes the roster at backup running back, wide receiver, tight end, linebacker, and defensive back.

And how can they not keep preseason star T.Y. McGill as a backup defensive lineman? McGill has played on nine NFL teams in eight seasons, so he finds a way to stick and his 3 ½ sacks in the two preseason games and a big forced fumble in the 49er game were impressive. Rookie corner Akayleb Evans was another player who had a good showing against the 49ers, especially in run support, and he’ll make the team as a backup corner and special teamer.

Preseason games are hard to watch when the starters sit out, but it’s an intelligent thing for O’Connell to do with top players such as Dalvin Cook, Justin Jefferson, Adam Thielen, Danielle Hunter, Za’Darius Smith, Eric Kendricks, Patrick Peterson, and Harrison Smith. I’d like to see the rest of the starters play in Denver, including Cousins, for a series with the starting offensive line, so they have a little game action before the opener. We see QBs such as Josh Allen and Patrick Mahomes getting some game snaps, so why not Cousins as long as he’s with the No. 1 O-line?

1.All-Pro offensive tackle and Rodgers’ blind side protector David Bakhtiari was activated off PUP by the Packers, but it’s uncertain if he’ll be ready to start opening day in Minnesota when he would have to face Hunter and his ex-teammate Smith as he returns from a bad ACL injury.

2. The Cleveland at Carolina opener got a lot more interesting, with Panthers Coach Matt Rhule naming ex-Browns QB Baker Mayfield as the opening day starter ahead of Sam Darnold. Think Mayfield will be extra fired up for that game after the Browns jilted him for Deshaun Watson? Jacoby Brissett gets the start for Cleveland with Watson suspended.

3. And Tom Brady has returned to the Bucs after his 11-day hiatus. Speculation is he was spending time with his wife and kids, and perhaps we’ll learn more in the days ahead, but it’s still a very strange thing for a quarterback and team leader to do—and basically unprecedented– while his teammates sweat it out in training camp.