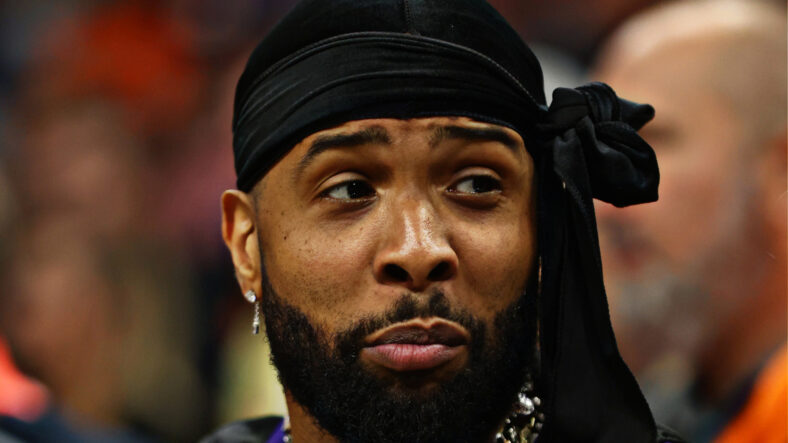 That’s the connection, evidently, linking Odell Beckam to the Vikings. Kevin O’Connell took over the franchise in February after Minnesota orchestrated back-to-back losing seasons in 2020 and 2021. The mediocre standstill for the franchise caused the terminations of Rick Spielman and Mike Zimmer.

Beckham tore his ACL in the Super Bowl, a bittersweet event as he won a championship — but then wound up on the shelf for [what’s shaping up to be] eight months. He’s expected to miss the first half of the 2022 regular season with an eye on joining a contender in November or so.

And according to Mike Florio from ProFootballTalk.com, Beckham landing in Minnesota with O’Connell holds weight. Florio recently wrote, “I still think the Vikings could be interested, given coach Kevin O’Connell’s experience with Beckham in Los Angeles. That offense already will be much better simply with the hiring of an offensive-minded head coach.”

He continued, “Throw in Beckham, and the Vikings could become a factor in a wide-open NFC.”

Beckham has played for the New York Giants, Cleveland Browns, and Rams. He started his career with a bang, setting the rookie record for receiving yards in a single season (2014) before Justin Jefferson (2020) and Ja’Marr Chase (2021) toppled the mark. The Giants shipped the LSU alumnus to Cleveland in 2019, where he never really caught on. Before joining the Rams last year, he effectively talked his way off the Browns roster, seemingly blaming then-QB Baker Mayfield for the disharmony.

He’ll turn 30 in November, so it’s likely time to chase more rings. Non-Vikings destinations, at least in theory, include the Tampa Bay Bay Buccaneers, Green Bay Packers, and Kansas City Chiefs. Since the start of 2017, Beckham has missed 35% of all football games, and with the ACL recovery, his health prognosis isn’t spotless.

However, in a potential half-season gauntlet for the Vikings, Beckham could nestle nicely in O’Connell’s offense. Minnesota has a litany of wide receivers ready to contribute — Justin Jefferson, Adam Thielen, K.J. Osborn, Ihmir Smith-Marsette, etc. — but good teams always find ways to get richer. Glance at the Buccaneers and Rams rosters over the last couple of years.

The Vikings have around $9 million in cap space as of mid-August. An eight-game run for Beckham won’t exceed that number. If Beckham doesn’t sign anywhere before the start of the regular season, monitoring the Vikings win-loss progress best indicates the feasibility of a Beckham addition.

Beckham joining the Vikings would be a silly concept if Mike Zimmer still ran the team. Yet, because of ties to O’Connell, the idea isn’t that crazy.

Everything You Should Know in New Blockchain Guide

Heartbreak for Bisi Begs Two Vikings to Step Up

Vikings Have 2 of the Fastest RBs in NFL, per ‘Madden’