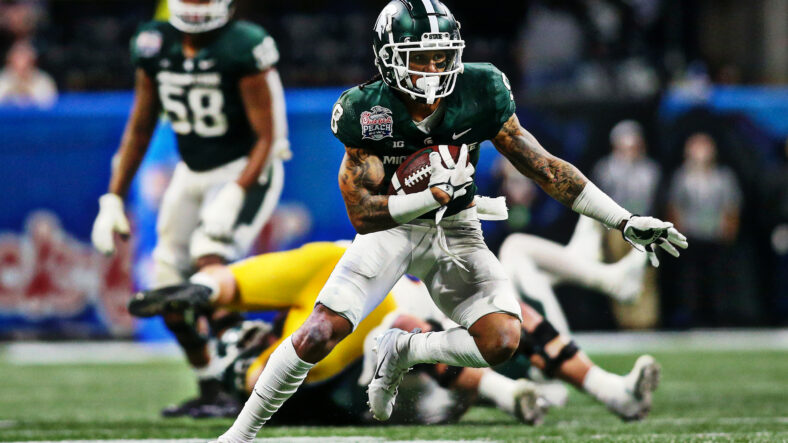 The 2022 Minnesota Vikings have contenders to return punts this season, but no man is anointed the job as of July 1st.

Rookie wideout from Michigan State, Jalen Nailor, joined The Bleav in Vikings Show this week and affirmed to Bryant McKinnie and others that he expects to be in the mix for the punt returning job. Nailor was asked if he’ll be a part of the group vying for the punt returner gig, and he replied, “Yes, sir. Absolutely. I definitely believe I’ll be able to go out there and show my skills as a punt returner.”

Nailor cleared up the “mystery” as Minnesota should have about three or four men striving toward punt-returning duties in 2022. Nailor, Albert Wilson, Ihmir-Smith Marsette, and K.J. Osborn are theorized as candidates for the job.

The Vikings drafted Nailor in the 6th Round of the 2022 NFL Draft. He’s the direct trade compensation for the Mike Hughes deal, a cornerback shipped to the Kansas City Chiefs in the summer of 2021. That move was conducted by former general manager Rick Spielman, offloading Hughes after he struggled to stay healthy with the Vikings. Hughes then left the Chiefs in free agency and signed with the Detroit Lions. He’ll play against Minnesota at least twice per season, if healthy.

Spielman was terminated in January, and new boss Kwesi Adofo-Mensah took over. And with the Hughes-trade pick, he selected Nailor as a potential big-play threat in Kevin O’Connell’s 2022 offense.

When O’Connell came to town, the only notable holdover coach for his new staff was Keenan McCardell, the incumbent WR coach. Then, leading up to the NFL draft, Nailor was a player McCardell reportedly “pounded the table” for in the 2022 offense. For that reason, unless he struggles to acclimate, Nailor should be a shoo-in to make the 53-man roster in September. Moreover, the ability to return punts helps his case.

Last season, Dede Westbrook returned punts at a reasonable clip. The Vikings flirted with a reunion involving Westbrook in the spring but ultimately signed Albert Wilson, who could also win the punt returner job.

At Michigan State in 2021, Nailor tallied 695 receiving yards and six touchdowns. Nicknamed “Speedy,” Nailor ran a 4.5 forty-yard dash at the 2022 NFL Combine. He also placed in the Top 10 among receivers in several drills at the event.

The Vikings Director of Scouting, Mike Sholiton, said about Nailor in April, “The best thing he does is get him the ball on the run, get him in space, and he runs away from people, creates separation with his speed and then pulled away at the second level, and I just think a well-rounded athlete all together.”

Overall, Nailor is 5’11”, smooth, and was a big-play threat at Michigan State. He averaged a whopping 18.8 yards per catch last season, a promising forecast with the Vikings new-look, O’Connell-led offense.

The Vikings Top Players from Best to Worst: After Week 13