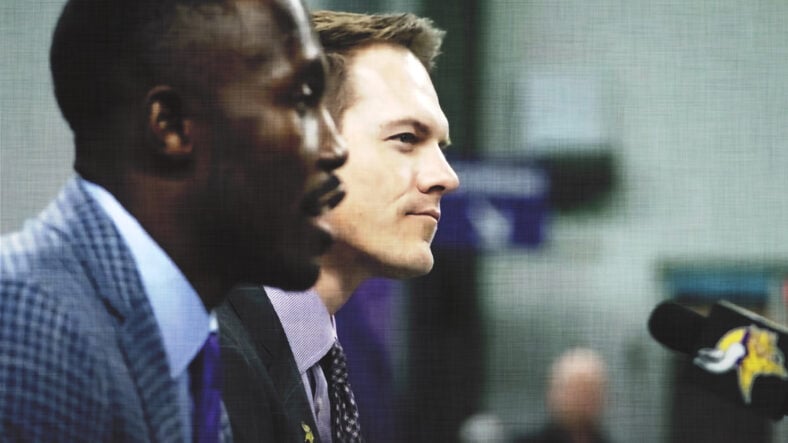 Minnesota Vikings “co-QB2” Kellen Mond did precisely what he could not afford on Saturday versus the San Francisco 49ers — throw together a performance of total regression from the first preseason game.

The team already knows the ceiling for Sean Mannion — you can bump your head on it — so the Vikings exist in a spooky territory with one preseason game left. What happens if Kirk Cousins is injured in 2022?

Mannion actually outplayed Mond against San Francisco, but that implies Mannion was productive. He really wasn’t. Therefore, the Vikings must scour free-agent options at QB2 or limp into the 2022 regular season with gobs of hope that Mond figures it out on the fly. And because Minnesota aspires to play postseason football in 2022, potentially leaving fate in the hands of Mond or Mannion is suspicious.

Too, there are additional problems with the “just sign a different quarterback” method. The free-agent wire is picked over as most NFL teams — especially the playoff contenders — already addressed QB2 in March and April. Overall, “the list” contains these names, all of which might be an upgrade over the Mond-Mannion experience:

Others are waiting to be signed, too, but they’re largely unproven.

Assuming Cam Newton isn’t ready to play second fiddle to Cousins, Blake Bortles possesses the most experience, starting 73 games in his career and even tabulating 35 touchdown passes in the 2015 season with Jacksonville. Of course, that season was peppered with “garbage time,” but that’s how it goes.

Teams led by Mike Glennon are 6-25 (.193) in the last nine seasons — yuck. But the Vikings could be at a juncture to determine that underwhelming win-loss is still a better option than Mond or Mannion. And at age 32, Glennon has seen a lot.

Kevin Hogan and Brett Hundley are bedfellows for one reason — they’ve tried out for this flavor of Vikings. Minnesota’s head coach Kevin O’Connell complimented Hundley back in May during a tryout, indicating he scouted him intensely in 2015.

Hogan dropped by Eagan, Minnesota, for an audition earlier in the month but left without a contract. He’s also nicknamed The Gunslinger.

Finally, there’s the Kyle Sloter option. He’s signed twice with the Vikings, made an All-USFL team a couple of months ago, was signed and released by the Jacksonville Jaguars, and now wants to return with the Vikings.

Also remember — before the Mond Pond stagnated over the weekend, the Vikings were already reportedly open to signing another QB2.

Because of O’Connell’s vocal affinity for Hundley, he could be the frontrunner if the Vikings choose a contingency plan. Otherwise, the franchise picks one-or-the-other from Mond or Mannion and crosses its fingers.

Highlighting all we do not know about marijuana-infused drinks

Can I Expedite My Marriage or Fiancée Visa?

Per History, Vikings Have Right Man for Job in Philadelphia

Is the Middle Ground Between Zimmer and O’Connell?