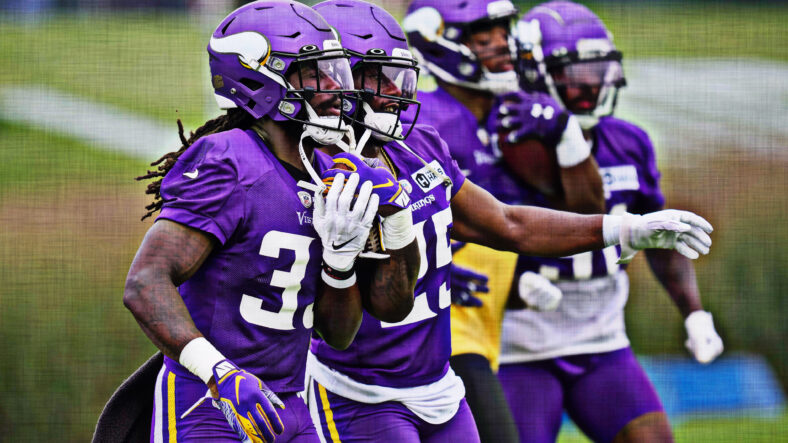 The 2022 NFL season is fast approaching. The new rookies are settled in and are being plugged into their position groups, ready for training camp.

Some groups like the running backs and wide receivers were strong last season and will have more expectations of the same. Other groups like the secondary and offensive line needed serious improvement. The Vikings front office has strived to provide that improvement. In July, here are the Vikings position group rankings according to PFF.

It’s top marks for the running backs, as it should be, despite a somewhat disappointing season last year from star back Dalvin Cook. Injuries have continued to be a problem for Cook, but his stock remains high. When it comes to pure talent, there is nobody better.

Alexander Mattison is a quality backup player now in his fourth season. He will hit free agency next year, so he will be eager for the type of season that persuades somebody to take a chance on him being their lead back.

After that, the Vikings have Kene Nwangwu, who caused excitement with two kick return touchdowns in his rookie season, and rookie Ty Chandler. As well as longtime fullback CJ Ham who looks to still have a role with the team.

PFF has the Vikings way too low for my money. They talk like Adam Thielen is 36 years old, and KJ Osborn did nothing last season. With Justin Jefferson leading the way, that is a formidable trio. Albert Wilson has been added to give the position some more experience, while Ihmir Smith-Marsette showed promise in his rookie campaign. Jalen Nailor was drafted to add even more speed to the group.

The fact that they seem to be including tight ends in this group makes the #15 ranking more puzzling to me when you include Irv Smith. The fact he missed all of last season, and there’s not much behind him on the roster. Perhaps it goes against the Vikings.

Four of the five offensive line positions are locked in. The one up for grabs is right guard, which PFF is giving to rookie Ed Ingram.

Eyes are on Christian Darrisaw. If last year’s first-round pick can show considerable development, then the Vikings will have two good tackles. The potential is there, and with no injury concerns coming into this season, he has every chance.

The interior is where the Vikings biggest problems lie. Ezra Cleveland has proven to be serviceable at left guard. The other two positions have been a major cause for concern for a long time. Garrett Bradbury is getting one last chance to prove himself at center while there are several players vying for the right guard spot. The training ground battle will provide a winner out of Ingram, Chris Reed, Jesse Davis, and Wyatt Davis.

In the middle, the Vikings have strength with Dalvin Tomlinson and Harrison Phillips. It will likely be Armon Watts that makes it a front three unless someone like James Lynch, Jaylen Twyman, or Esezi Otomewo can force their way in. That’s a solid unit. The question mark is where the pass rush comes from — something Twyman could add.

The real strength comes from the edge with Danielle Hunter and Za’Darius Smith. The only issue is that it comes with an asterisk as both are coming off of significant injuries. If those two stay healthy and come back and play at their best, the Vikings defense is a completely different animal. If they cannot, the Vikings will rely on DJ Wonnum, Patrick Jones, and Janarius Robinson.

The Vikings come in high, believing that Eric Kendricks’ down year last year was just a blip. A change in leadership and scheme is expected to help, along with the addition of Jordan Hicks, a solid and underrated player who, like Kendricks, is a tackling machine. The same can be said for rookie Brian Asamoah, who I expect to make an impact in his rookie season.

Other depth options come in the form of Blake Lynch, who had a breakout season of sorts last year. He certainly looks like a capable depth player. Chazz Surratt and Troy Dye will try and force their way onto the roster in further depth.

The Vikings will have two rookies and the still green Cameron Dantzler as critical parts of their secondary. Calling them an ascending unit is a fair assessment. If Lewis Cine and Andrew Booth settle early and make an immediate impact, it would make a massive difference to the Vikings secondary.

They have two of the best veteran players in the business in Harrison Smith and Patrick Peterson to help nurture the young players. The secondary was a real problem for the Vikings last season. If they can find significant improvement, it will go a long way to altering the team’s fortunes.

BNB Beacon Chain Becomes Open Source: What Does This Mean for Businesses?