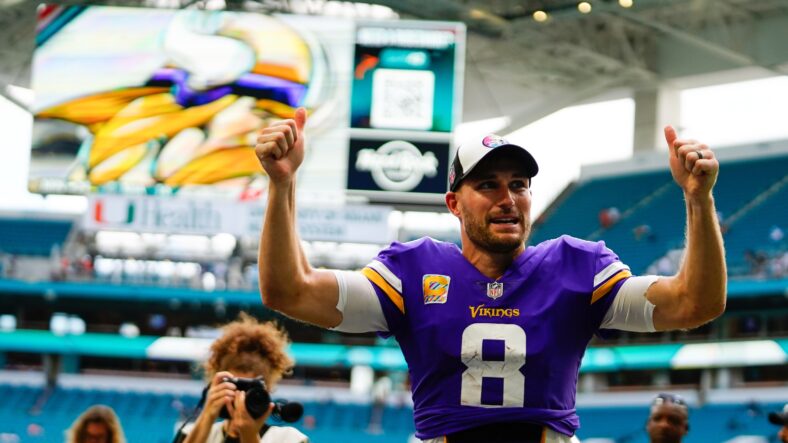 Week 6 is in the books, and the Minnesota Vikings moved to a 5-1 record atop the NFC North division. A 24-16 victory over the Miami Dolphins got the job done, therefore making it four wins in a row for the Vikings as they head into the bye week.

How are the Minnesota players feeling after another win on the road? To illustrate, let’s look at some Vikings players’ reactions to the win over the Dolphins.

We start with Dalvin Cook. It was a tough day for Cook back in his hometown, however it ended with smiles all around. A pedestrian day for Cook was flipped on its head with a 53-yard touchdown run. Returning to Miami and playing in front of his family wasn’t the only thing making Cook feel at home. The amount of purple in the stands from the traveling Vikings fans also did the job.

Akayleb Evans will be a regular on these. The rookie cornerback is always quick to jump on social media to celebrate with the Vikings fans.

Kris Boyd was looking for some post-game celebratory music. He deserved some. As a key member of special teams, the unit had the bounce-back game they needed in Florida.

More wins mean more “ice” for quarterback Kirk Cousins. It was far from a stellar day for the Vikings offense. However, Cousins managed to engineer a couple of touchdown drives. Which along with Cook’s long touchdown run was enough to seal the win.

I suggested last week Cousins and the chains could be the gift that keeps on giving. It seems I was right. I don’t think this will be the last time we see Cousins draped in chains this season.

We finish by moving away from Vikings player reactions and onto a pre-game video from wrestling legend Chris Jericho. Who was in attendance with his family to support the Vikings. Wearing a retro Randy Moss jersey, Jericho predicted a big year for the Vikings. As the team moves on to a 5-1 record, maybe he is on to something.

The Dolphins wide receiver had 12 catches for 177 yards; however, the Vikings defense managed to keep him from scoring. Despite the disappointment with the result, Hill took the time to commend the Vikings on a good game. Demonstrating his character is as great as his ability.

Strawberry Hepatitis A Outbreak sickens dozens in U.S. and Canada