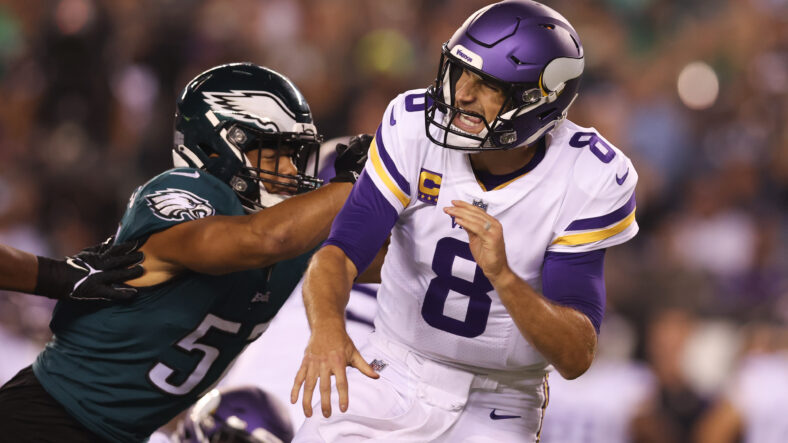 Minnesota flew high after a Week 1 triumph over the rival Green Bay Packers, but for Vikings fans, that game feels like decades ago.

The Eagles defeated the Vikings 24-7 behind 486 yards of total offense. Philadelphia, led by third-year passer Jalen Hurts, moved the ball downfield at will against Ed Donatell’s defense — eerily like the Vikings allowed opponents to do in the mid-2000s.

The Vikings have not won versus a non-Chicago Bears team in a Monday night road game since 2008. The struggle continues. Minnesota is now 14-26 (.350) on the road for Monday Night Football in franchise history.

Hurts personally bludgeoned the Vikings for 390 total yards (passing and rushing) and 3 touchdowns in one of the best dual-threats performances against Minnesota in years. The Vikings could not contain Hurts, his pals — or drudge up any momentum on defense in the 1st Half.

Minnesota’s offense was out of sync for most of the game while making a few inroads in the 1st Half. But nothing at all about the Vikings offense was consistent in Philadelphia.

Kirk Cousins was the leading rusher with 20 yards.

And Cousins better hang his hat on that factoid because his 2nd Half was dreadful. He’s accountable for about one — maybe 1.5 — terrible games per year, and the boogeyman arrived on Monday Night Football. It doesn’t help Cousins that his reputation is already marred on Monday nights, sinking to a 2-10 “quarterback record” in such contests. What the world perceives Cousins as on Monday Night Football — he was against the Eagles. Ineffective, out of rhythm, and hitting a mini-groove in garbage time, he finished with a lowly 17.5 QBR.

Minnesota’s special teams were a high point, though. Rookie punter Ryan Wright recorded a 49.2 yards per punt average, proving once again that the Vikings made the right choice by opting for his services over the veteran Jordan Berry late in the summer. Cornerback Patrick Peterson also blocked a field goal — a first-of-its-kind moment for Minnesota in four years — that should have dragged the Vikings back into the game.

But nothing clicked thereafter, and Cousins delivered one of his three interceptions.

The Eagles ascend the court of public opinion as a frontrunner in the NFC, perhaps playing a miniature second fiddle to the Tampa Bay Buccaneers. The Vikings will use the next six days preparing for the upstart Detroit Lions, who currently have the seventh-best offensive in football per EPA/Play.

The Vikings were bad on defense, especially in the 1st Half. Cousins played poorly in the 2nd Half, and the two items intertwining sunk the franchise to 1-1.

Minnesota is an early seven-point favorite to beat the Lions in Week 3.

(WIP) Backing up the backups

The Battle Over the Women’s Center at D.C.’s Sibley Hospital

So, What’s Normal for the Minnesota Vikings?

Ground Game Will Be Vital to a Vikings Victory in Philly