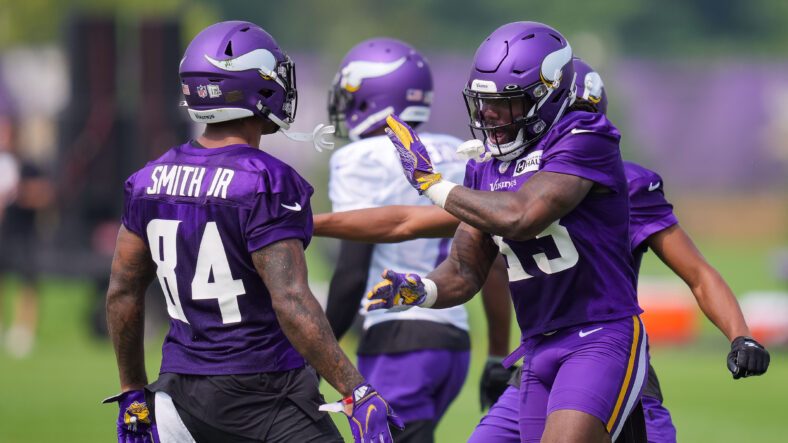 A Minnesota Vikings midweek injury update wasn’t all too necessary one week ago. But with players’ pads on and training camp in full swing, a few minor injuries have beset the organization.

Thankfully, Minnesota hasn’t suffered major setbacks like the Denver Broncos, a team that lost Tim Patrick (WR) and Damarea Crockett (RB) for the season on Wednesday. Cross your fingers.

These are the Vikings current injuries. Jesse Davis, who is vying for the starting RG job, is healthy, too.

Connelly injured his knee against the Pittsburgh Steelers last season and is evidently still recovering. There is no timetable for his return, although he should be ready within the next couple of months.

The Vikings use Connelly frequently on special teams. He’s played one career snap on defense in Minnesota after departing the New York Giants in 2020.

Cook was back at practice on Wednesday after briefly departing on Tuesday. Because he’s missed a lot of time in his career to injury — he’s been absent one-third of all career games — Vikings fans fear the worst when hearing Dalvin Cook is injured.

He’s fine. The show rolls on.

Edit-copy-paste from Cook’s diagnosis. Mattison, too, was temporarily sidelined with a hand injury earlier this week. Like Cook, Mattison returned to practice on Wednesday.

Mattison does not have a Cook-like injury history, so anxiety over his status is minimal. The Vikings are on tap to showcase Mattison as the RB2 for a fourth straight season unless the franchise does something funky like promote Kene Nwangwu or rookie Ty Chandler.

Nwangwu was injured on Monday and hasn’t returned in the subsequent two days. He’s the team’s kick returner, fastest player, and theorized breakout candidate on offense.

Why the breakout forecast? Well, he has gazelle-ish speed. And for a new coaching regime stuffed with offense-first thinkers, Nwangwu’s speed could be utilized by Kevin O’Connell.

His injury isn’t major, and he should return to camp soon.

Proehl, a second-year WR, is more like Connelly with an indefinite timetable to return. He suffered a torn ACL at training camp in 2021, and it’s apparently taking a long time to heal.

When he returns, he’ll fight to make the roster, as the Vikings already have 5-7 wide receivers realistically clamoring for a 53-man roster spot.

Smith tossed on pads Monday for the first time since the 2021 preseason — and was promptly injured 45 minutes later. This injury should be considered the Vikings most significant because the organization is banking on hope that he’ll be ready for Week 1 against the Green Bay Packers.

If Smith is not ready, Minnesota would turn to Johnny Mundt or Zach Davidson for TE1 duties. Some fans are keen on that idea; others panic.

The Vikings 2022 Offense by the Numbers: After Week 5

The Vikings Are the Worst 8-2 Team in NFL History, by the Numbers.