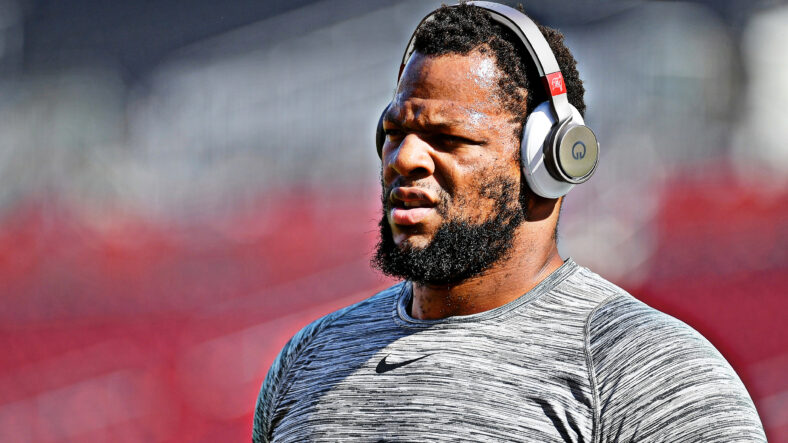 Minnesota has about $11 million in cap space as of June 21st, and that would likely do the trick to onboard Suh for the 2022 campaign.

Suh personally tweeted his interest in the Raiders on the same day as the Dragon tweet, leading some folks to believe Las Vegas was the frontrunner for his services.

Yet, a hiccup could ultimately nominate the Vikings as the primary suitor for Suh services — the Raiders aren’t necessarily interested in Suh, according to Josina Anderson.

Vincent Bonsignore from the Las Vegas Review-Journal confirmed the Anderson reporting, writing on Tuesday, “The sense is the Raiders aren’t as keen on the idea as Suh is, at least at the moment. That is always subject to change depending on how the Raiders assess their defensive line needs ahead of training camp. And money always plays a role. But for now, it appears the interest is not mutual.”

And if the Raiders don’t have a reciprocal affinity for Suh, the Vikings are the standalone remnant from the Dragon tweet.

Minnesota could arguably use the five-time Pro Bowler and three-time All-Pro on its 2022 defensive line. For now, Armon Watts is slated to start in Ed Donatell’s defense, and his performance in 2022 will determine if he’s a full-time starter in the NFL or if his 2021 relief duty for Michael Pierce was an “every dog has its day” arrangement. Adding Suh would send Watts back to reservist duty and formulate a star-studded defensive front for the Vikings.

In theory, a Suh addition would look like this upfront for Minnesota:

The Vikings finished 2021 with this lineup in the defensive trenches:

So, one can see the enhanced firepower, especially if general manager Kwesi Adofo-Mensah opts for Suh’s services.

The only drawback? Suh had a down year in 2021. He tallied a 49.4 score from Pro Football Focus, by far the worst of his illustrious career. It is unclear if the unflattering grade signals an age-related decline or simply a “down year” during his final stint with the Buccaneers.

In any event, with the Raiders evidently not enamored by the free-agent candidacy of Suh, the Vikings should be considered at the front of the pack.

Suh was teammates with two current Vikings in Los Angeles a few years ago, Sean Mannion and Johnny Mundt.

The Great Race Update: Chasing the youth teams of NATMUS & EFV8FM day one

After Jordan Berry, Will There Be More Surprise Cuts for Vikings?

How the Vikings Stars on Offense Have Fared Against the Eagles