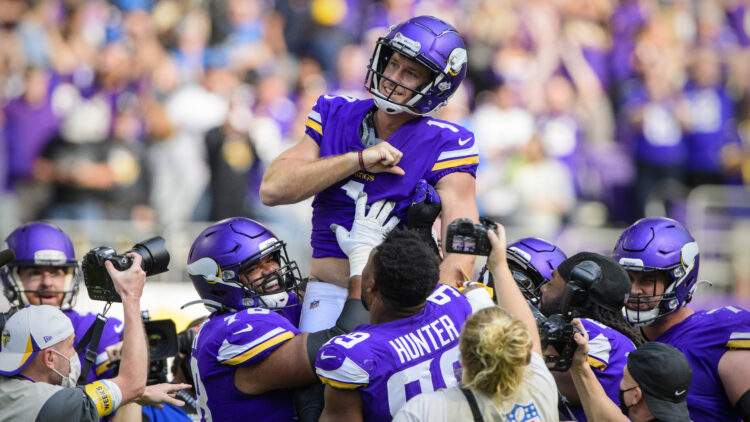 After Week 2 of the 2021 NFL season, onlookers of the Minnesota Vikings were resentfully low on then-new kicker Greg Joseph.

The Vikings played in the desert versus the Arizona Cardinals, a team flying high at the time and one that would later be known as the league’s top team around midseason. Ultimately, the Cardinals collapsed — an annual Kingsbury tradition in Arizona — but they were magnificent when the Vikings played them. Still, Minnesota hung tough and nearly when won the damn thing.

The nearly is because of Joseph. During the 4th Quarter of the game, Kirk Cousins marched the Vikings offense down the field with the game on the line. The old head coach, Mike Zimmer, opted for the pause button on the offensive drive, preferring a game-winning field goal attempt. It was a chip shot.

Predictably, Joseph was likened to Blair Walsh — which was a fair comparison — and fans spent a full week disgruntled at the Vikings, and Joseph in particular. Never mind Joseph’s heroic theatrics the week before at the Cincinnati Bengals. He was clutch in that Week 1 contest, keeping the Vikings in the game with a field goal from 53 yards as the 4th Quarter expired.

Thankfully for Joseph’s sake, he had 15 games to ascertain forgiveness and redemption. Joseph ended up connecting on a couple of walkoff field goals — one of the “relief” variety against the Detroit Lions when Minnesota almost coughed away certain victory at U.S. Bank Stadium. Then, against the main rival, the Green Bay Packers, Joseph ended Aaron Rodgers’ evening in Week 11 with a teensy game-winner.

Because of those kicks and prowess for drilling long field goals, Joseph was not replaced by new general manager Kwesi Adofo-Mensah this offseason. The Vikings kicker banged through seven of nine field goat tries of 50+ yards, the same percentage authored by the Kansas City Chiefs star Harrison Butker, who is characterized as a Top 3 NFL kicker.

Adofo-Mensah teetered on a summer competition, though. He signed rookie Gabe Brkic for a few weeks, and another summer kicker tryst — they were popular with Zimmer in charge — was on the way. Yet, after Vikings minicamp in June, Brkic was waived thanks to a lackluster showing in Eagan.

It is unclear if Adofo-Mensah will sign another kicker before the regular season. He probably would have done it by now. Michael Badgley is available, but he’s encountered some dreadful moments.

In the end, Joseph is likely to get another opportunity at redemption for the Cardinals miss. He didn’t let it ruin him like the Vikings kicker from 2015. The Vikings won two games because of Joseph following the Arizona atrocity, not in spite of him.

At heart, Vikings fans are a cynical breed, particularly pertaining to kickers. So, one more season sans heartbreaking mistakes should win them over indefinitely.

NFL Playoff Picks: The Divisional Round

The Vikings 2022 Offense by the Numbers: After Week 1