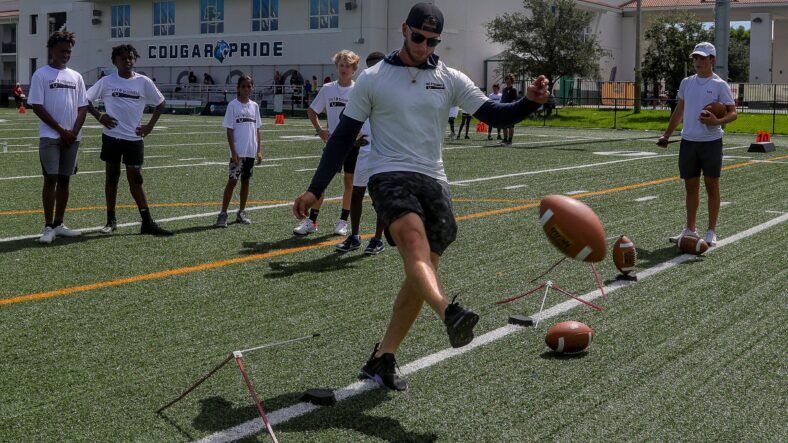 Brkic trekked to the Green Bay Packers soon after to compete with veteran Mason Crosby while the Vikings stuck with Greg Joseph. So far this summer, the decision to roll with Joseph was wise. Joseph has been deadly — in a good way — through 2.5 weeks of training camp. Nearly every day brings another positive mention of the South African kicker.

Last week, Joseph hit 58-yard field goals with ease, and he expanded the distance on Thursday. He hit from 60 to end the afternoon — and the kick appeared good for NFL-record-like distance. The Vikings Twitter account called the kick “casual.”

Of course, this is “only practice,” but Joseph drilling long kicks is assuredly better than missing dinkers. And Joseph got off to a rocky start as a Viking in 2021, missing one of those dinkers versus the Arizona Cardinals in Week 2. Because Joseph could not connect on a 37-yard field goal that would’ve walked off the Cardinals, Minnesota sunk to 0-2 and arguably never fully recovered.

Still, Joseph disallowed the mistake from ruining his first season in Minnesota. He later rebounded by winning two Vikings games with kicks — one against the Detroit Lions, the other versus the Packers. Joseph won back most Vikings fans with those redemptive actions.

Accordingly, he’ll have the kicker job all to himself, a rarity in the summer for the Vikings. During the Mike Zimmer era, Minnesota typically had two kickers at training camp, involving a youngster pushing the incumbent veteran to the limit.

That’s not needed this summer.

Even with his mammoth sin down in Arizona, Joseph was reliable from downtown in 2021. He hit seven of nine field goals from 50+ yards — the exact same percentage executed by Kansas City Chiefs kicker Harrison Butker. And Butker is classified as a Top 3 NFL kicker. Distance hasn’t been a problem for Joseph, and his summer production proves it all over again.

Vikings fans possess terrible anxiety, resentment, and cynicism toward kickers due to errs of Gary Anderson, Blair Walsh, and others in the last 25 years. That animosity won’t vanish merely because a decent kicker “had a good summer,” but Joseph is shaping up to be a trustworthy specialist.

The rubber will truly hit the road when Joseph is on the docket for another meaningful game-winning kick.

The Vikings 2022 Offense by the Numbers: After Week 3