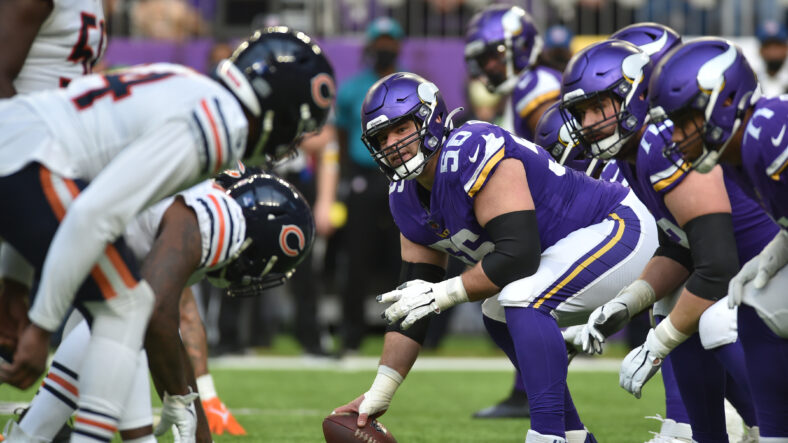 Meaningful people in the Vikings organization spoke highly about center Garrett Bradbury all offseason. They didn’t sign another real center competition, and the draft passed without a new center on the roster. The only two additions were Austin Schlottmann, a veteran backup center who started to be on the roster bubble when he signed, and Josh Sokol, an undrafted rookie from Sacred Heart University. Neither of the two presented any real threat to Bradbury’s starting job.

Despite putting all the chips on Bradbury’s number, the gamble doesn’t appear to pay off so far. He’s badly struggling in training camp, losing rep after rep against defensive tackle Harrison Phillips. Granted, the free agent signing is a strong man. However, Bradbury will have to go up against better players, and it’s not encouraging to see him struggle against a good but nowhere near elite player.

He’s on thin ice because of three years of subpar play after the Vikings selected the center in the first round of the 2019 draft. Bradbury was the 18th overall pick. The last center drafted higher was Damien Woody in the 1999 draft. General manager Kwesi Adofo-Mensah also declined the fifth-year option, sending Bradbury into his contract year. He’ll play for his next contract in the 2022 season, whether he gets an extension in Minnesota or a new deal elsewhere. His salary depends on his 2022 performance.

The Vikings, however, signed one guard preparing to push Bradbury. Chris Reed came over from the Indianapolis Colts. It looked like he was supposed to be battling Jesse Davis for the starting right guard spot, but the Vikings drafted Ed Ingram, and he’s running away with the job. Now, Reed isn’t needed as a guard and is transitioning to center instead. He already took a lot of reps with the second team during training camp. Head coach Kevin O’Connell doesn’t rule him out as starting center.

That quote is a warning for Bradbury. Reed suffered an elbow injury and subsequently missed the first preseason game and is also questionable for the second game against the 49ers. O’Connell called his injury day-to-day, and Reed didn’t consider it a big deal either.

The offensive lineman never played center in a regular season NFL game, but he often played the position in the preseason for various teams — Jacksonville, Miami, Carolina, and Indianapolis. Per PFF, he played 253 snaps as center in the preseason.

Reed went undrafted in the 2015 draft. He played his college ball in Minnesota State for the Mavericks. Adam Thielen’s Mavericks.

His first four NFL seasons occurred in Jacksonville, as he switched between practice squad, active roster, and injured reserve. In 2019, Reed had a short stint in Miami. After another time on the waiver list, the guard signed a contract with the Carolina Panthers and played a few games in 2019 and most games in 2020 for the team.

Once again, as a free agent, he signed with the Indianapolis Colts, where he shared the offensive line room with Quenton Nelson. The journeyman Reed appeared in 61 games in his career and started 29 for various teams. He ended his 2021 campaign with a 67.2 PFF grade, ranking him 38th of 82 eligible guards. That’s just slightly below Ezra Cleveland.

The Vikings could opt to sign another center or even trade for one. However, at this moment, it’s Bradbury vs. Reed.

The Vikings and Their Sneaky Champagne Problems

The Next Vikings Superstar – Vikings Territory

Vikings May Have Blown Chance for Postseason Run