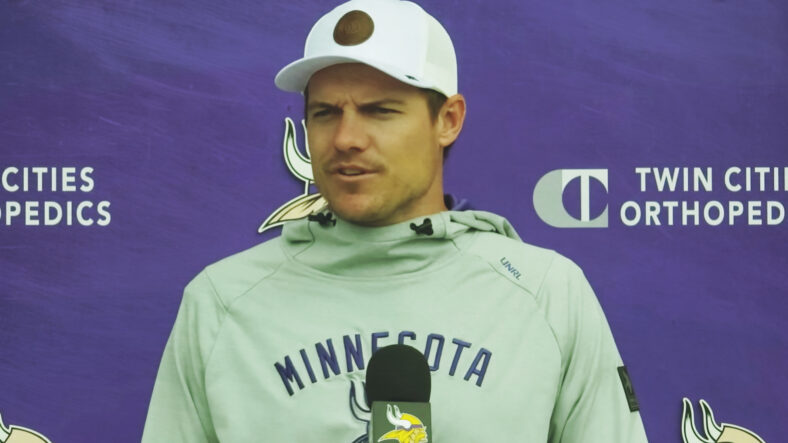 Generally speaking, new head coaches in the NFL are afforded a three-year window to “turn things around” for the franchise. The science is not exact, but three years can be considered an overall rule of thumb.

The Minnesota Vikings have a new head coach, Kevin O’Connell, who likely falls into the same category. But his assignment is caveated and a bit rarer.

For O’Connell, his Vikings are ready to win now, at least per the musings of the new leadership regime and the construction of the roster. And for the most part, when a new coach takes over an organization, baby steps are required to prove the skipper is headed in the right direction.

Because of how the Vikings have navigated this offseason — re-upping with Kirk Cousins, signing Za’Darius Smith, and not moving on from expensive veterans — the franchise is again all-in for the playoff contendership. Peek at some other new coaches around the league like Matt Eberflus (Bears), Brian Daboll (Giants), Doug Pederson (Jaguars), etc., and you will find men who must only hit seven or so wins to inspire confidence heading into 2023.

Of course, if Minnesota finishes 8-9 or 9-8 and misses the postseason, O’Connell won’t be fired. But he will likely lose his QB1 soon after, as the Cousins experiment in Minnesota will fully sour.

So, the stakes for O’Connell are higher than an average head coach, who would be expected to finish in the ballpark of 7-10 with a trajectory to jump toward a 10-7 record or so in 2023. O’Connell’s Vikings are a different animal. The employment of keynote veterans hinges on whether Minnesota reaches the playoffs in 2022.

His leash has a few knots. O’Connell just departed a Super Bowl-winning program in the Los Angeles Rams. Because his old boss Sean McVay won a Super Bowl with a Cousins-like quarterback, Matthew Stafford, O’Connell will be asked to squeeze some of the McVay voodoo into the Vikings operations.

If he doesn’t do it and the Vikings miss the playoffs in 2022, he’ll get a new directive — win without Cousins and perhaps veterans like Adam Thielen and Eric Kendricks.

Indeed, Minnesota is banking on the current depth chart, plus tutelage of a new coaching staff, to push the Vikings up the ladder. After all, O’Connell is not inheriting a trashy program. The Vikings finished 15-18 (.454) in 2021 and 2022, so they’re not digging themselves out of a bunker. They’re in purgatory, an implied satisfaction with mediocrity in 2020 and 2021.

While Vikings fans grew vitriolic with the back-to-back nine-loss seasons, surmounting mediocrity has been done before. From 2014 to 2016, the New Orleans Saints, led by Drew Brees, finished 7-9 three years consecutively. Nobody cared because Brees was the quarterback, and the reaction was, “poor guy doesn’t have a defense.” The Saints used the 2017 offseason to improve defensively — and boom — they became relevant again for four seasons before Brees’ retirement.

That is why O’Connell’s “ask” is different. The Vikings are asking the young coach to win now with a quarterback whom he’s worked with in the past. If the twosome can’t engineer a playoff trip in Year One, O’Connell’s will get a modified mission statement to win soon — but likely without Cousins as the QB1.

Some Good and Bad News for Corner Akayleb Evans

Vikings Could Have Full House at QB in 2022

Potential Vikings CB1 Has a Plan for 2023