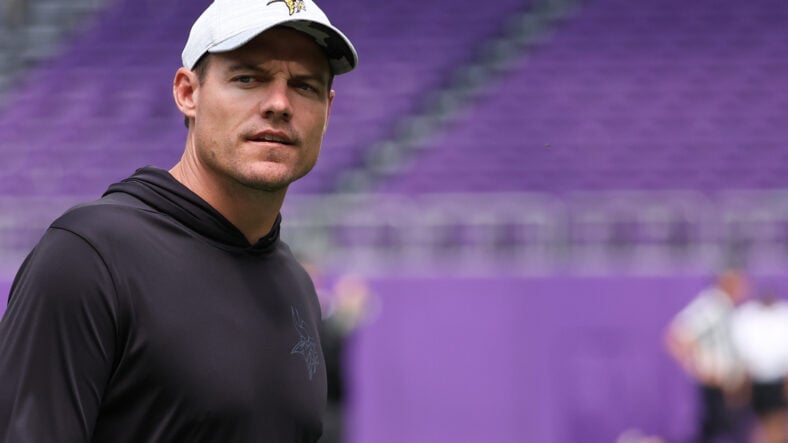 The Minnesota Vikings host the Detroit Lions on Sunday, the second of six matchups against NFC North foes. The Vikings have toppled the Lions eight times in the last nine games.

But Sunday’s showdown arrives with a bit more flair, as Detroit may not be a “punching bag” anymore. The Lions, through two weeks, possess one of the NFL’s most productive offenses, which will try out its theatrics versus a Vikings defense that performed poorly in Week 2.

The game is terribly important for Vikings — yes, even though it’s only Week 3 — and here’s why.

Listen, there’s no other way to dice it: The Vikings were punched in the lips on Monday Night Football. And they fell to the mat, refusing to get up that evening.

The Kevin O’Connell honeymoon is over. It lasted nine months. Now, the new skipper must prove his mettle in dealing with adversity. Had the Vikings merely lost by a last-second field goal courtesy of a heroic Jalen Hurts drive in the 4th Quarter, Minnesota would not be facing major adversity heading into Week 3.

But that didn’t happen.

The Vikings were slapped and flogged — in a game where many Vikings fans thought the franchise stood a chance. After about 20 minutes of real-time, it was evident that the hypothesis was false. The Eagles outclassed the Vikings, solidifying themselves as Super Bowl contenders, while Minnesota resembled the 2021 Vikings more than the team that just suffocated the Green Bay Packers.

Beating the Lions would indicate to fans that “this guy can bounce back,” referring to O’Connell. Can he convince 53 of his men that the Eagles debacle was an outlier and that regrouping with a victory over the Lions is attainable? That’s his job; that’s why the Vikings front office hired him.

With the Vikings, O’Connell has faced zero adversity since February. A new head coach is allotted a honeymoon. But that’s over, thanks to the nature of the Eagles loss. You’ll know late Sunday afternoon if the man can cope with adversity this early in his head coaching career. Some can; some can’t. Coaches, like players, take time to develop.

Defining the Vikings as a Mediocre Team or Playoff Contender

Arguably of the same importance as the aforementioned adversity, the outcome of Week 3 will define the trajectory of the 2022 Vikings. Right now, you should ask yourself: Is this team closer to the 8-9 Mike Zimmer Vikings of last year, or has O’Connell truly turned the page and nurtured Minnesota into a contender?

The stakes are simple. If the Vikings win — indeed, they’re for real. You should expect the franchise to compete for the NFC North and playoffs thereafter.

However, if they lose, and this is the important part — at home— to the Jared Goff-led Lions, well, fans must severely reevaluate their expectations. Playoff-contending football teams don’t lose to the Lions at home. Write that down. Had the game been scheduled in Detroit, there would be more slack. Alas, it is not.

Consider Week 3 a Choose Your Own Adventure book from your childhood: A win suggests the Vikings will be in the hunt late in December for playoff seeding. A loss would mean this is a 2021 Vikings redux.

Vikings Podcast: Breezin’ into the Bye