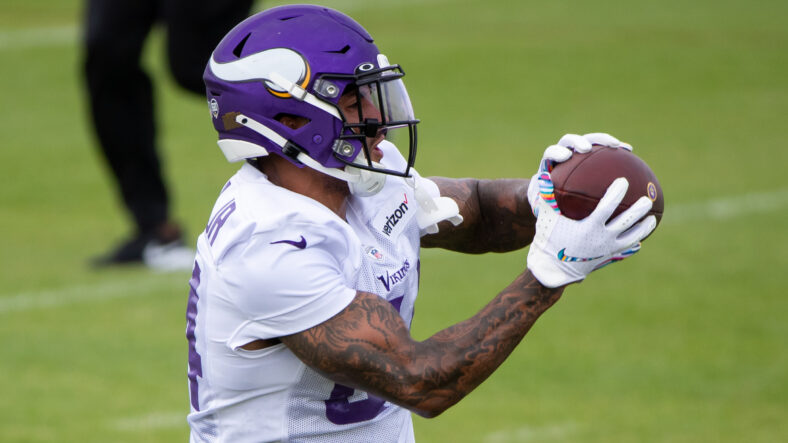 Minnesota Vikings tight end Irv Smith missed all of the 2021 season due to a torn meniscus, delaying his oft-prophesied “breakout season” for another year. Fully recovered heading into Vikings training camp last week, Smith seemed poised to resume his quest for a blast-off inside Minnesota’s offense led by new head coach Kevin O’Connell.

But there was a hiccup that caused the first bit of mini-drama at training camp as Smith was hurt, at least briefly, on Monday. Here is the timeline of events.

First, Smith trotted onto the field in a triumphant back-to-health video. It was his first time in pads since the Vikings 2021 preseason game at the Kansas City Chiefs.

Smooth sailing, right? Not quite. The next Smith-related news was the mention of injury.

And while nothing suggests the injury is grave, Smith returned to practice sans a helmet.

Meanwhile, no substantive information regarding Smith’s departure was available after practice. So, the incident is likely not major. Yet, here’s the problem. If the Smith tweak turns into a lengthier ordeal sometime this week, Minnesota is in trouble at tight end.

One of the few criticisms of the Vikings current roster is depth at tight end. Most football brains foresee Smith effectuating the “breakout” role in 2022 — he’s in a contract year — and that’s a wonderful forecast for the Vikings and fantasy football managers. After Smith at TE1, though, the lay of the land is muddier. This is the team’s current TE depth chart:

If the Smith hubbub grows grimmer, the Vikings would have to lean on an unproven commodity at tight end, and it’s unlikely to find lightning in a bottle two years in a row. Tyler Conklin filling in admirably at TE1 in 2021 is not the norm. And that is precisely why Vikings enthusiasts have recommended the free-agent exploration of a player like Kyle Rudolph (too late — he signed with Tampa Bay Buccaneers), Jared Cook, Eric Ebron, Jimmy Graham, or Blake Jarwin for the last several weeks.

For a team eyeing playoff contendership, leaving TE2 to chance — with a man who just missed an entire season as TE1 on a top-heavy depth chart — is a little confusing.

Of course, all Smith fears could be laid to rest Tuesday, but this illustrates why the team would be wise to examine the free-agent market. The alternative is a pivot to Johnny Mundt (a Los Angeles Rams carryover by O’Connell) and a lot of finger-crossing.

Hyundai in Talks to Acquire 42dot, a Korean Self-driving Start-up

The Vikings 2022 Offense by the Numbers: After Week 1

The Calling Card for the 2022 Minnesota Vikings is Consistency