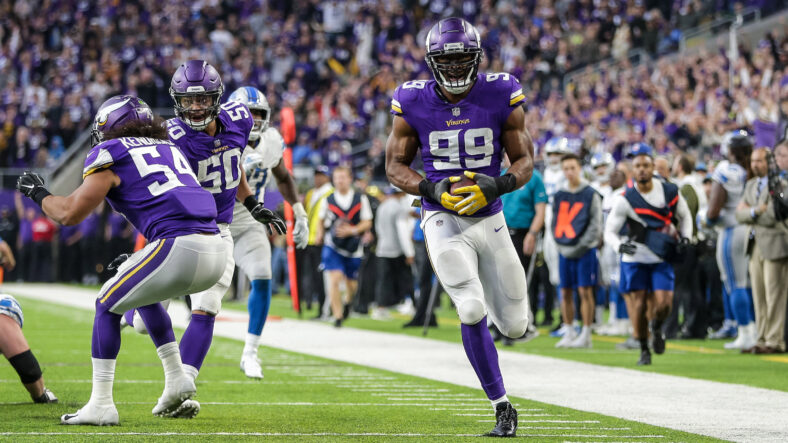 From 2015 to 2019, Minnesota Vikings EDGE rusher Danielle Hunter ranked sixth in the NFL in sacks (54.0). During that stretch, his first five seasons, he played in 78 games while starting 49.

Then, in 2020 and 2021, Hunter missed 79% of all Vikings games due to a neck injury (2020) and a torn pectoral muscle (2021). Accordingly, Hunter has fallen off the stardom radar for some and must effectuate a season of dominance to reestablish his reputation.

Hunter resolved a little contract suspense with new general manager Kwesi Adofo-Mensah in March and has a clean health bill for the 2022 season. ESPN recently ranked the NFL’s Top 10 EDGE rushers, and Hunter was on the outside looking in an “honorable mention.” Also of note — the voting system for the rankings involved coaches, league executives, and players.

Jeremy Fowler from ESPN mentioned the Vikings defender this way, “Hunter is a top-10 rusher when healthy, but he has missed 26 games over the past two seasons. Still, he has 60.5 sacks in 85 career games.”

Per ESPN, these 10 pass rushers are better than Hunter heading into the new season:

And, in fairness to ESPN, all those men are worthy of Top 10 placement. Hunter just probably needed to be healthy amid the last two seasons to qualify. He was certainly on track before the summer of 2020 to be a part of the Top 10.

The peak form of Hunter has escaped folks’ minds. Missing football games causes that. This is the statistical impact of Hunter on the Vikings, per EPA/Play:

Vikings Defensive Ranking,
Per EPA/Play,
With and Without Danielle Hunter:

Both statistical drop-offs are vast and illustrate the vitality of Hunter to the Vikings defense — at least the Mike Zimmer version. Hunter will play with a new coaching staff this September led by Kevin O’Connell from the Los Angeles Rams. Ed Donatell, the defensive coordinator for the Denver Broncos from 2019 to 2021, takes over Minnesota’s defense and switches the scheme to a 4-3. Early indications suggest Hunter will adapt to the system just fine.

Hunter also inherits an outstanding running mate in Za’Darius Smith, a free-agent EDGE rusher who defected from the Green Bay Packers. Like Hunter, Smith was beset by injury last year, making his price tag cheaper than expected for the Vikings. Smith should free up Hunter in the defensive trenches to wreak havoc — and vice versa.

Vikings fans still hold Hunter in the highest of regards, but he needs another 15-17 game stretch in 2022 to show the world he’s a legitimate Pro Bowl pass rusher.

Hunter will turn 28 in October.

Through 85 career games, Hunter has more sacks than any of these men in their first 85 games: