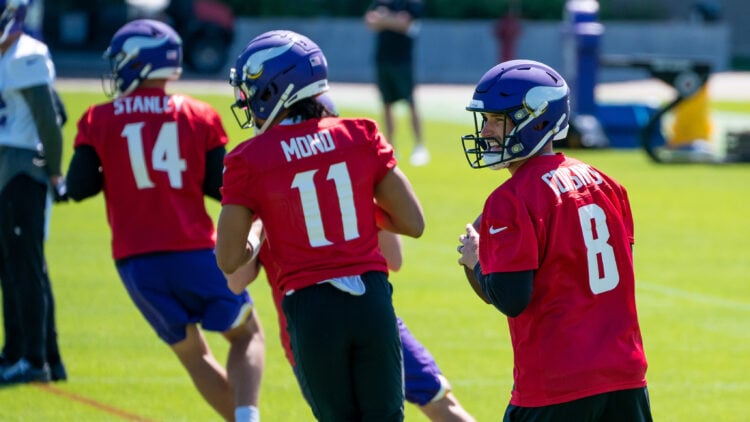 As the Minnesota Vikings contemplate the formulation of the 53-man roster at the end of the month, the general manager and coaching staff must decide a path for second-year passer Kellen Mond.

If the Vikings were faced with this same situation before 2022, the resolution would be simple — keep Cousins and Mullens and stash Mond on the practice squad while likely cutting Mannion.

But that’s the “old way” of thinking.

Nowhere is it written that the Vikings must keep only two quarterbacks on the 53-man roster. In fact, they could very reasonably keep three, probably Cousins, Mullens, and Mond. While Mannion is said to offer substantial guidance and comfort as a locker room presence, the trade for Mullens probably signaled the end of Mannion in purple.

The 2022 version of Stafford, Wolford, and Perkins can be Cousins, Mullens, and Mond. Why not?

Of course, so much conversation and fuss over QB2 is, in all likelihood, unnecessary. Cousins has never missed a game to injury — he did miss one pivotal matchup due to COVID in 2021 — in his career, an overlooked attribute. The 2022 season will probably come and go with Cousins starting 17 games.

Still, the Vikings were forced to rely on QB contingency plans in 2016 and 2017. Sam Bradford was brought aboard the roster in emergency capacity six years ago. And the following year, Bradford, too, was hurt, thrusting Case Keenum into the QB1 role. Therefore, wondering who might support Cousins in the event of injury is worthwhile.

Based on how Los Angeles conducted business last year, retaining three quarterbacks isn’t all that far-fetched. Mond could be the QB3 while Mannion hits free agency.

Cardano Pools Are 33% Ready for Vasil Hard Fork, Here Is How Much More Is Missing

The Road Map for the Vikings to Win the NFC North

The Vikings Rookie to ‘Keep an Eye On’

Patrick Jones II Has Prime Opportunity to Emerge in 2022

The Vikings Top Offensive Performers at Eagles, per PFF