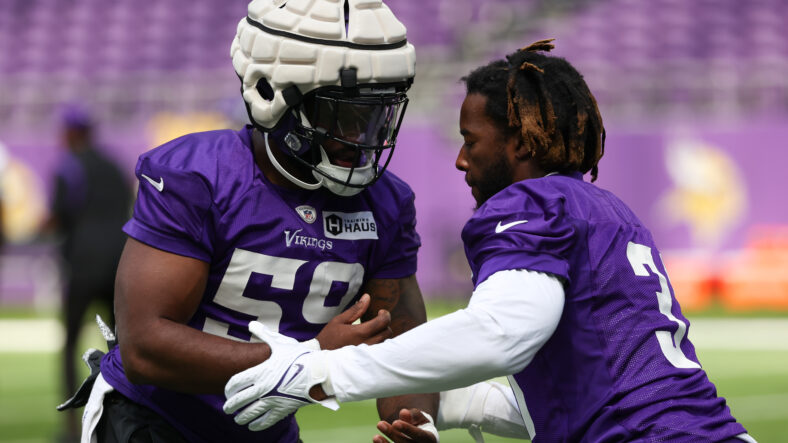 In accordance with the NFL’s mandatory roster trim-downs, the Minnesota Vikings released EDGE rusher Andre Mintze and four others on Tuesday.

The Vikings had until 3:00 pm CST Tuesday to set the roster at 85 players.

The Vikings signed Mintze in June to compete for a 53-man roster spot. He previously played for the Denver Broncos, the team that employed Vikings defensive coordinator Ed Donatell from 2019 to 2021.

Mintze is 23 years and was an undrafted free agent in 2021 from Vanderbilt, working his way up the Broncos roster last year. All told, he played 64 defensive snaps for the 2021 Broncos. He tallied four tackles — and that’s about it. Mintze also notched a 55.6 grade from Pro Football Focus.

Now, the EDGE-rusher section of the Vikings roster is left with Danielle Hunter, Za’Darius Smith, Pat Jones, Janarius Robinson, and Zach McCloud. And when additional roster cuts are announced on August 23rd and August 30th, that list only figures to dwindle by a name or two.

The other four cuts — Bargas, Hennigan, Stevenson, Smith — were unsurprising. For Bargas, Minnesota will already have a tricky time keeping all of its current RBs and FBs, especially after the preseason performances from Kene Nwangwu and Ty Chandler last weekend. Hennigan was at the bottom of the team’s WR depth chart. Meanwhile, Stevenson and Smith were extreme longshots to make the 53-man roster.

The next batch of cuts — down to 80 players — is due in one week, and that grouping is unlikely to make waves. But the massive trim down in two weeks is guaranteed to raise eyebrows as 27 Vikings hit free agency.

Moreover, between Tuesday’s cuts and the 32 more on the way, 16 players can reside on Minnesota’s practice squad in 2022, an increase announced in May. Practice squad personnel will be identified around the time the Vikings roster is condensed to 53 players.

The Vikings take on the San Francisco 49ers this weeked at U.S. Bank Stadium in the second of three preseason games.