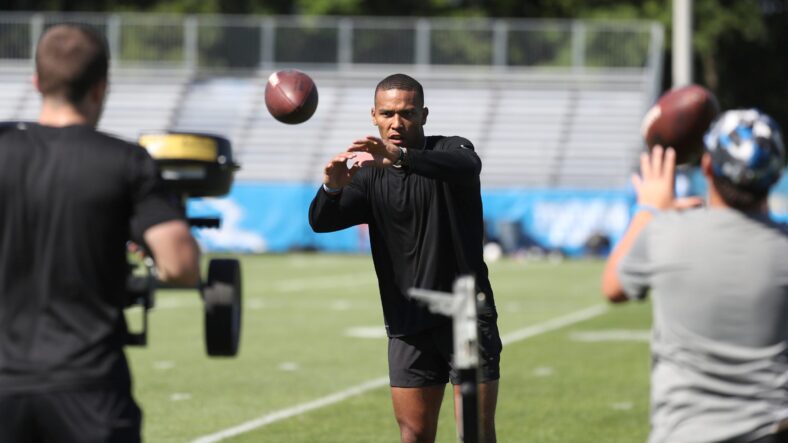 The Minnesota Vikings have utterly dominated the Detroit Lions throughout NFL history (79-40-2), and if they want to continue the trend, winning shootouts may be on the agenda.

That’s because the Lions offense, out of nowhere, is suddenly formidable, scoring points at the same clip as the Kansas City Chiefs (35.5 per game).

And prior to Monday Night Football, showcasing the Vikings traveling to the Philadelphia Eagles, the Lions rank second in the NFL per points scored. The Eagles chipped off 38 points in Week 1 against the Lions — their defense isn’t great; we’ll get to that — and currently lead the business in points with just one game played.

Regardless of the Eagles or how many points they tally versus Minnesota on Monday, Detroit is racking up points like a slot machine. Indeed, Jared Goff and friends are slicing and dicing NFC East defenses at an otherworldly rate.

At end of business on Sunday, September 18th, the Lions rank seventh in the NFL per offensive EPA/Play. Per offensive efficiency, the Lions have a better offense than Green Bay Packers, Denver Broncos, Los Angeles Chargers, and 22 other teams. Wowzers.

Now, if you’re a Lions enthusiast, it’s time to close the article tab and skedaddle. Detroit’s defense, on the other hand, isn’t matching the herculean output of the offense. While rookie Aidan Hutchinson sure looks like Bruce Smith, the defense as a whole “isn’t there yet.” In fact, they’re terrible. The Lions defense ranks 30th in defensive EPA/Play, only outflunked by the New York Jets and Arizona Cardinals.

In that vein, the Lions probably aren’t sniffing playoff contendership — yet. The defense would need to drag itself inside the Top 20 to nudge the Packers and Vikings out of the way in the NFC North. However, the offense is cooking, an outcome viewers of Hard Knocks may have foreshadowed.

And, guess what? Those Lions take on the Vikings in Minneapolis six days from now. They won’t be pushovers.

Here’s When Bitcoin May Plunge to $13,500, According to Head of Markets at IG Europe