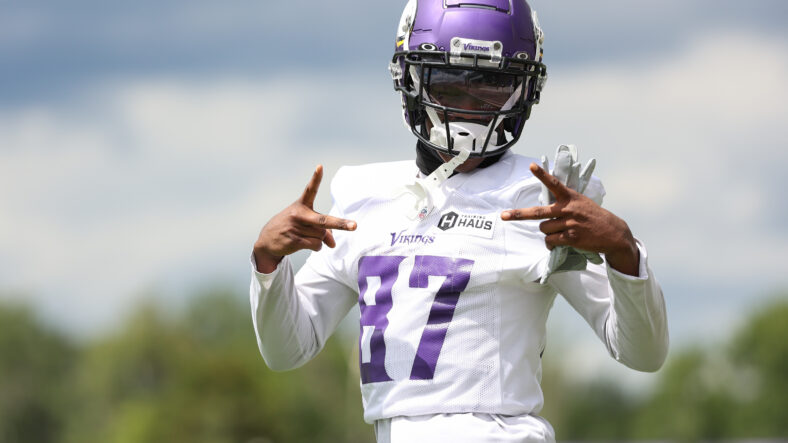 The Minnesota Vikings released their first unofficial depth chart on Wednesday, four days before the team heads to Las Vegas for a preseason date with the Raiders.

Among a handful of surprises was the apparent emergence of wide receiver Myron Mitchell, a second-year, 53-man roster contender from the University of Alabama-Birmingham.

The depth chart was not a traditional version denoted with numbers or pecking-order style. Instead, Minnesota plainly labeled starters and backups while seeming to indicate tiers of reservist players. And Mitchell found himself in a WR5-WR6 category, a surprising development because many Vikings fans don’t know Mitchell at all.

Justin Jefferson and Adam Thielen were labeled as the team’s WR starters — not shocking to any Vikings onlookers. The WR3-WR4 territory included K.J. Osborn and Ihmir Smith-Marsette, which was also more of a formality.

But then the order became interesting, as Mitchell and teammate Bisi Johnson inhabited Tier 3.

To date at Vikings training camp, Mitchell has played wonderfully at times. So, in that regard, his ascension on the depth chart is to be expected. However, sometimes at any team’s training camp, every dog has its day. Until the release of the unofficial depth chart, many believed Mitchell to fit that billing.

During the lead-up to the 2021 NFL Draft, The Draft Network said about Mitchell, “Mitchell’s speed and ball skills make him an appealing vertical threat. He averaged almost 16 yards per reception in college. Mitchell has the ability to produce after the catch and hit explosive plays in the return game.”

That skillset could be coming to a Vikings 53-man roster near you.

Mitchell’s miniature surpassing of rookie Jalen Nailor and veteran Albert Wilson is also noteworthy. Prominent Vikings-related voices have been high on Nailor, but for now, his situation on the depth chart lives in “prove-it” territory. Too, the Vikings signed Albert Wilson in June to replace the exiting Dede Westbrook, perhaps in a WR5-WR6 with some special teams roles. Yet, according to the first depth chart, Wilson is buried and will evidently need a strong preseason in the next three weeks. Wilson is not listed as a kick or punt-returning option.

In 2021, Mitchell lived on the practice squad and was called up for one game — against the Chicago Bears in Week 15. Mitchell was on the field for a single offensive snap, and that was a wrap for his rookie season.

At UAB, Mitchell tallied 63 receptions for 990 yards and seven touchdowns in 22 games.

If the Vikings keep six-plus wide receivers on the final roster, Mitchell might get his first glimpse of prolonged regular season action.

The Seventh Circuit Asks, “What’s Wrong With Having Lots of Patents?”

The Saints Will Physically Look Different against Vikings in London