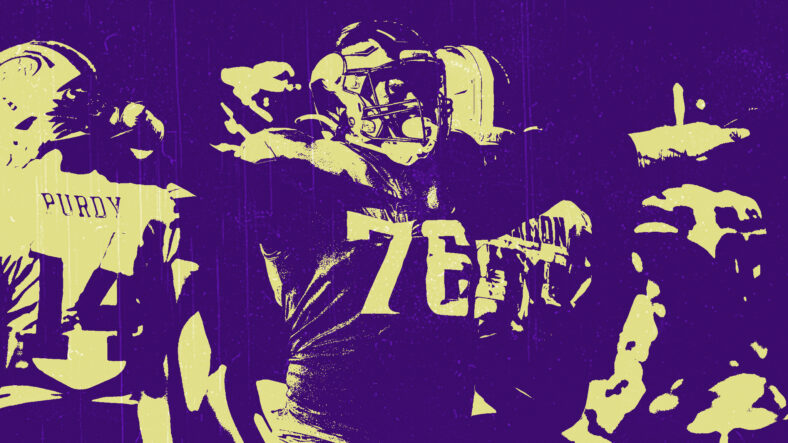 When an unknown backup-to-the-backup nose tackle is gaining national attention, the NFL player’s stock must be climbing.

Minnesota Vikings defensive lineman T.Y. McGill has marshaled a dream preseason to date, standing out in games versus the Las Vegas Raiders and San Francisco 49ers. And folks are taking notice.

McGill, who turns 30 in November, has been a part of 10 NFL franchises since joining the NFL seven years ago. An undrafted free agent from North Carolina State in 2015, McGill was discovered by the Seattle Seahawks but found his on-the-field footing with the Indianapolis Colts.

Fast forward to 2022 — and nine teams later — McGill is commanding national esteem from entities like CBS Sports. Jordan Dajani from CBS Sports published an article on Thursday detailing “things we learned” about each NFL team. For Minnesota, it was Dajani’s epiphany that McGill “has a motor.”

Dajani elaborated, “Something that stood out to me was T.Y. McGill. He had five total tackles and 1.5 sacks this weekend after recording two sacks last week. McGill looks like he has a high motor. If he doesn’t win on his initial move, he will just keep pushing until he breaks through.”

Before training camp, McGill was theorized by some as a “camp body,” a player unlikely to make the 53-man regular season roster. He played in two Vikings games last year, tabulating just 33 defensive snaps. A holdover from the Rick Spielman and Mike Zimmer era, McGill faced a longshot to make the team.

But that longshot status has crystallized into a surer thing.

Cutting McGill next week may make the Vikings look doltish. That’s probably why McGill is a safe bet to make the active roster by most reputable roster projections. With the steam accrued by McGill this summer, it isn’t bombastic to forecast starting snaps for the veteran lineman at some point in the regular season.

The only drawback of McGill’s emergence? He may “steal” a roster spot from a younger defensive lineman — those of which fans invested high hopes. Jaylen Twyman and Esezi Otomewo are examples of players who could be on the outside looking in because of McGill’s recent performance.

McGill will get one more crack at preseason supremacy — if he isn’t in “rest the good players” protocol — on Saturday when the Vikings travel to Denver. Head coach Kevin O’Connell has already hinted that most starters will sit, capping a preseason with virtually no playing time from the upper-echelon personnel.

Minnesota is set to announce a 53-man roster next Tuesday.

Everything You Need to Know About Autodialers