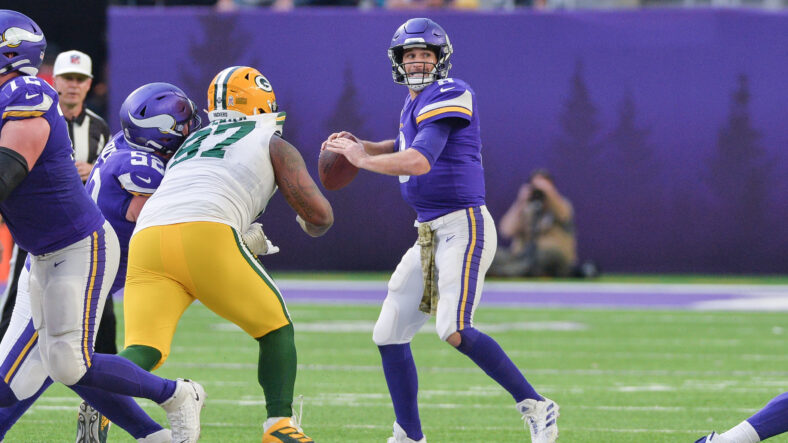 For a little while, Dustin has done a series on Purple PTSD called “Questions Answered.” He regularly takes on questions related to the Vikings. In this version, I’ll be turning to topics that still present some uncertainty.

It certainly seems so.

In two seasons, Reagor has done some good things as a punt returner. He scored a touchdown on punt return as a rookie. As a sophomore, he brought 31 punts back for 227 yards. That’s a relatively modest 7.3 yards return average.

Even still, it’s encouraging that the Vikings have an experienced returner. Reagor’s main job will be to secure the football so that a talented Minnesota offense has a chance to score. Being able to pick up yards is a bonus that we’ll hopefully see as early as this Sunday.

Question #2: Will the iOL Struggle in Pass Protection?

There’s a lot of optimism surrounding rookie RG Ed Ingram. Don’t forget, though, that he’s a rookie who only has a promising preseason behind him. On Sunday afternoon, he’ll be tasked with helping to slow down Kenny Clark, Preston Smith, Rashan Gary, and several other talented Packers defenders.

Garrett Bradbury will be the starting center and Ezra Cleveland is at LG. Of the three, I’m most optimistic about Cleveland, who is entering Year 3 in the NFL. He’s a good player who is still getting better.

In an ideal world, the Cleveland-Bradbury-Ingram trio ends up doing well in 2022. It’s fair to expect a strong effort in the run game. The Green Bay game will be their first chance to show they can similarly do a good job in pass protection.

Question #3: Do The Vikings Have Enough Edge Rusher Depth?

We’re all expecting great things from Danielle Hunter and Za’Darius Smith. Heck, I think they’ll combine for 30 sacks this season.

The concern rests in how the depth edge rushers will do.

D.J. Wonnum, Patrick Jones II, and Luiji Vilain are the backups. At least one needs to emerge as a strong 3rd option. Hunter and Smith can’t play every snap. When one (or both) is getting a rest, the Vikings will be turning to a younger, more unproven player.

Slowing down Rodgers – and every other QB – will be much easier if there is consistent pressure. The task needs to go beyond just Hunter and Smith.

Has Justin Jefferson Ever Struggled So Mightily?

This May Be Last Hurrah for Aaron Rodgers