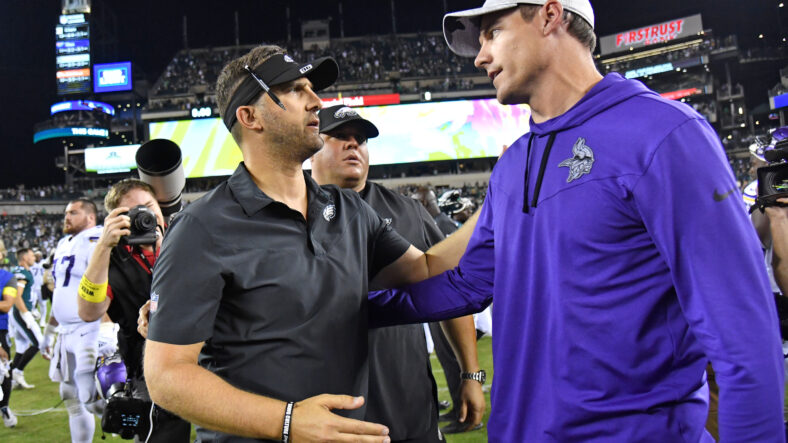 Monday night was an absolute disaster for the Minnesota Vikings as they got embarrassed by the Philadelphia Eagles, 24-7. Everyone focuses on the negatives after a loss like this, and rightly so, there’s plenty of pieces of the blame pie to go around.

That said, though the Vikings got blown out doesn’t mean there aren’t positives from this game. Here are five positives that we can take away from Monday night’s Vikings mess.

Defense Pitched a Shutout in the Second Half

As bad as the Vikings defense was in the first half, they came out of halftime and pitched a shutout in the second half. After a first half during which the Vikings allowed 347 yards and 24 points, this should be taken as a positive sign.

Granted, the Eagles were able to play a bit more conservatively with the lead, but the Vikings, particularly Cam Dantzler, made plays and were able to get far more stops in the second half of this game. If the offense hadn’t laid a goose egg as well, this would be a much bigger talking point coming out of Monday night.

The Johnny Mundt Investment Is Paying Off

Irv Smith is going through his ups-and-downs right now. That is certainly a disappointment after all the hype he received not only this offseason, but last offseason as well before tearing his meniscus.

That said, the experiment with Johnny Mundt has been paying dividends over the past two weeks. Through two games, he’s already up to 5 receptions and 45 receiving yards. Coming into the season, he had just 10 receptions and 93 receptions over the course of his career.

Combine this reliability as a receiver with solid blocking in the run game, and Mundt is starting to round out into a regular TE1.

Fluky Mistakes Were Made

The Minnesota Vikings made a number of costly mistakes throughout Monday’s game, but at the end of the day, this feels like a contest where you just throw out the tape. There were a ton of fluky mistakes made, especially on the offensive side of the ball.

Among the most notable of these mistakes were a number of balls that should’ve been caught and were just flat-out dropped. The worst of these was the Irv Smith Jr. drop. Had he caught that pass and took it to the house, the Vikings would have cut the lead to seven before halftime.

Additionally, we saw a miscommunication between Cousins and Jefferson that turned into an interception. Jefferson ran the wrong route, Cousins threw the ball to where Jefferson was supposed to be, and Darius Slay was there for the easy pickin’s. My money’s on Jefferson to fix that up going into the Lions game.

Between these two plays alone, the Vikings left as many as 14 points off the board. The fixes are as simple as a player with a career 71% catch rate (per Pro-Football-Reference) coming down with a ball, and one of the best wide receivers in the game running the right route. I have confidence that this won’t be an issue moving forward.

As bad as things were for the majority of this Vikings game, the special teams showed up again. Greg Joseph nailed his XP attempt. Ryan Wright is tied for the NFL lead in punts inside the 20.

But the highlight of the game came when Patrick Peterson burst off the edge on an Eagles field goal attempt to come up with the block. Kris Boyd then picked it up and returned it back to the Eagles 30-yard-line.

Of course, Kirk Cousins would momentarily throw his second interception of the game, but hey, the block was still cool, and special teams continue to be a strength of this team.

Humble pie is a dish best served cold, and the perfect time to swallow it is early in the season. The Vikings got punched in the mouth, had their lunches stolen, whatever analogy you want to use. For the next six days, they have to deal with the fact that they got embarrassed on national television on Monday Night Football.

I’d be willing to bet that they respond, and they are extra motivated to never have to deal with this feeling ever again. That doesn’t mean they won’t lose another game for the rest of the year. However, the fact that they are getting used to adversity now is better than cruising through the regular season only to face a challenge for the first time in the playoffs. This team will be battle-tested, and hopefully, they come out on top next time.

Making the Case for Jalen Nailor

A Sharp Turn toward Boxing for Vikings Legend

The Vikings Depth Chart after 3 Trades in 2 Days