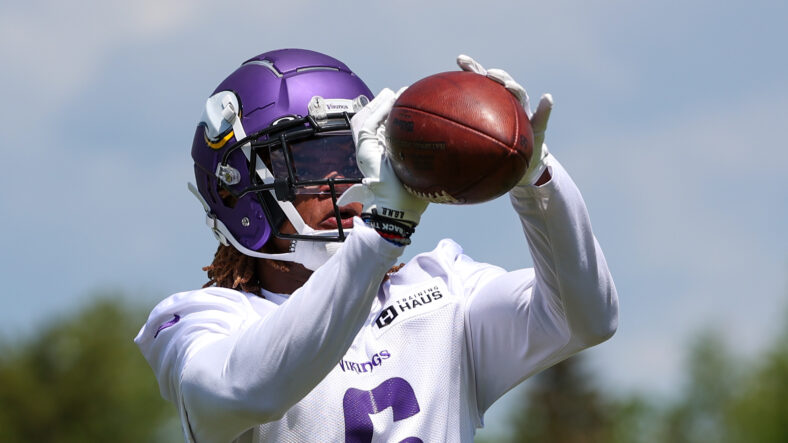 The Minnesota Vikings kick off training camp for the 2022 season on Sunday, July 24. The first preseason game against the Oakland Raiders is just a few weeks later on August 14. First-year head coach Kevin O’Connell has some decisions on his depth chart, and we’ll see that play out over the next month.

After drafting Lewis Cine with their first-round pick, new general manager Kwesi Adofo-Mensah went to work adding talent on a roster that was pretty tapped out from a salary cap perspective. Kirk Cousins is back under center with a new extension, and most of the same cast returns to a team that could be special under new leadership.

There is an opportunity for players to separate themselves during training camp, however, and these are three of the more intriguing situations I’m keeping an eye on.

Minnesota signed both Jesse Davis and Chris Reed as free agents this offseason. Davis comes to the Vikings after five seasons with the Miami Dolphins, while Reed most recently was a solid veteran for the Indianapolis Colts. Both players offer right around average ability on the offensive line, which is something that Minnesota has craved for years. Ezra Cleveland is already slated to start at the left guard spot, so someone will be a depth addition here.

The player with the highest upside is a second-round pick, Ed Ingram. Drafted out of LSU, Ingram has some previous character issues tied to his record but has been a standout on the field. He’s great in pass protection and stood out at the Senior Bowl. If things work out, he could be a consistent starter to keep Cousins on his feet for quite some time.

It seems fair to suggest that veteran Patrick Peterson is locked in as a starter, and so, too, should be the expectation for Cameron Dantzler. That leaves the third spot open, and Minnesota prioritized the position during the draft. Booth Jr. is a first-round talent that fell due to injury concerns. He’ll likely have the edge here if he can put up a good showing during training camp. Sullivan followed teammate Za’Darius Smith to Minnesota, leaving Green Bay. He’s been a decent veteran option, and a cornerback room void of options needs at least that.

Hand has been with the Vikings as a rotational player for two years after being selected in the 5th round of the 2020 draft.

There’s no denying the previous head coach didn’t like Minnesota’s third-round pick in 2021. Kellen Mond was rarely allowed to compete and ultimately was passed over for a final start in lieu of veteran Sean Mannion. There’s little upside to what Mannion brings on the field, but the uncertainty as to what Mond can provide remains.

O’Connell will need to decide whether Minnesota will have a guy he can groom to replace Cousins or if Adofo-Mensah will have to swing again at the position in a future draft. Carrying three quarterbacks could work, but that takes a roster spot away from another position more likely to make an impact.

Who are you hoping to land each of these jobs?