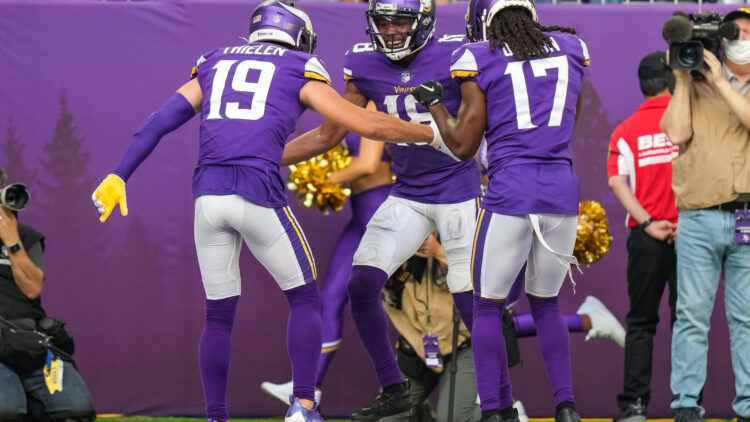 The 1998 Vikings are the favorite team of a whole generation of Vikings fans, and the three wideouts played a significant role. Randy Moss, Cris Carter, and Jake Reed are one of the most feared trios in NFL history. Now, one Viking tries to turn back time and bring back the good old times. Current Vikings receiver K.J. Osborn teased Vikings fans with a picture on Twitter.

The picture says ‘Three Deep’ and shows Jefferson, Thielen, and Osborn. The new trio is built a little differently, but some similarities exist.

In 1998, the Vikings already had the great Cris Carter and Jake Reed on the roster. Reed came fresh off his fourth consecutive 1,000-yard season. Carter, meanwhile, just finished his fifth successive campaign with four-digit receiving yards. While both already cracked the 30-year mark, a receiver wasn’t the top priority of the Vikings. That changed when Randy Moss somehow was available at pick 21.

‘The Freak’ was a 21-year-old, cocky receiver from Marshall university. He dominated college football, recording 1,820 yards and scoring 26 touchdowns in his 1997 season. The Vikings selected the dynamic athlete and formed a dynamic trio.

The video above shows the concerns teams had about Moss. Certainly, none of the concerns came true, and he became a Hall of Famer.

The modern Vikings built their trio by already having veteran Adam Thielen and drafting two receivers in the 2020 draft. Jefferson replaced Stefon Diggs, who was traded to the Buffalo Bills. The Vikings selected Jefferson with the same pick they got in return for their star receiver. Osborn was a fifth-rounder and, unlike Jefferson and Moss, needed a year to get ready for NFL football.

The results in 1998 were electric. Minnesota’s offense was absolutely unstoppable. Moss broke the rookie receiving yards record since the merger — a record that has since been broken by Anquan Boldin in 2003, Jefferson in 2020, and Ja’Marr Chase in 2021. His rookie record of 17 touchdowns is still the benchmark for today’s first-year players.

The three receivers were a crucial part of one of the most explosive offenses in NFL history. The 556 scored points were an NFL record at that time and stood until the Patriots scored 589 in 2007. Moss was also part of that team. Only the Patriots and four other teams scored more points in a single season than the 1998 Vikings.

The Vikings want to replicate that success to some extent. Thielen is an aging veteran like Cris Carter was. He, like Carter in 1998, is still an elite red zone threat and great possession receiver, but it’s unlikely he can burn cornerbacks in advanced age.

Jefferson has to take the role of Randy Moss. He’s the big-play threat and is overall one of the best players in football. Opponents will scheme their defense to stop Jefferson. He has already broken Moss’ rookie receiving record and has more yards than Moss in the first two seasons, also an NFL record. One difference between the two in the numbers is the lack of touchdowns. Moss had 11 more scores. That’s one of the rare areas in which Jefferson can still improve. In terms of yardage, he’s a solid bet to lead the league in receiving yards.

Osborn had a great coming-out party in 2021 after not playing a single snap in 2020. He scored seven times and recorded 655 yards. If he can continue to improve, he might slowly replace Thielen as WR2. If all three stay healthy and the offense gets more explosive, there are not a lot of better trios in the league.

Kevin O’Connell came from the Rams. That’s important for the three because the Rams ran plays with 11-personnel on roughly 85% of the plays. The Vikings did the same on just about half of that, at 43%. While the Vikings probably won’t come close to the 85% number, an increase will help Osborn to improve his numbers.

Overall, the offense can become a lot more consistent. The Vikings offense looked like an explosive unit in some parts of games and then disappeared for a half. A good example is a game against the Cardinals last season. If O’Connell can eliminate that inconstancy, the purple team can take full advantage of the dynamic receivers on the team.

What are the financial requirement for UK spouse visa – updated 2022

2 Former Vikings on Tap vs. Dallas on Sunday

National Opinion of the Vikings Is Different from Yours