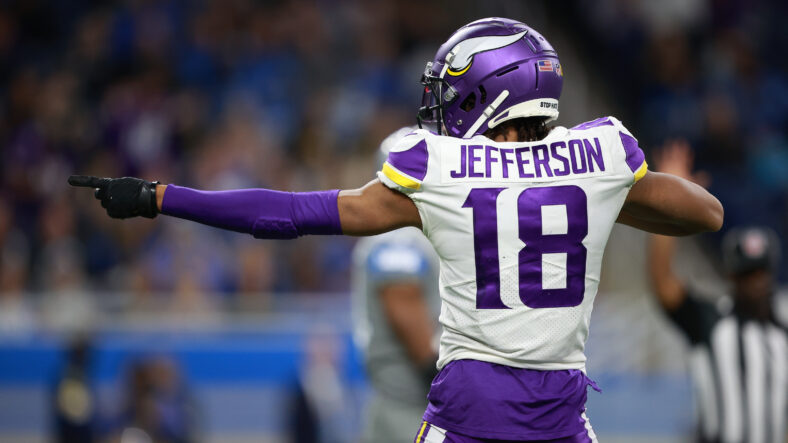 DETROIT, MICHIGAN – DECEMBER 05: Justin Jefferson #18 of the Minnesota Vikings reacts after a catch during the first half against the Detroit Lions at Ford Field on December 05, 2021 in Detroit, Michigan. (Photo by Rey Del Rio/Getty Images)

It’s been a while since Minnesota fans have had an outspoken star to cheer for in any respect. Patrick Beverley gave us a little taste of what it’s like with the Timberwolves playoff run this season but he’s far from a “star” at this point in his career.

While still feeling out his oats a little bit in the NFL, I’m starting to think that we’re going to get a bit of this outspoken, bold stardom from Vikings wide receiver Justin Jefferson. Through his first two seasons in the league, he’s sort of tip-toed around some of this with statements about Kirk Cousins and his lack of Joe Burrow swag and comparison comments when asked by the media. But with two stellar seasons under his belt and a trend that if it continues for a third season will put him at the top of the all-time charts, the success on the field might give him the confidence to start jawing a little more.

That’s seemingly something that most Minnesotans and almost all Vikings fans would be in favor of! So let’s look at some of JJ’s most recent comments under this lens…and if I can spoil the surprise, start to get excited because of what he’s saying!

Joining the NFL Network on Friday, Jefferson commented on some of the adjustments that he’s already seen with Kevin O’Connell’s offensive style. Mind you, it’s only been OTAs and Minicamps so far so the players are still just getting their feet wet when it comes to the new offensive scheme, but it sounds like they’re excited about it!

“Our offensive style, it’s not a run-first offense anymore,” Jefferson explained. “Just us being able to put different people in different positions and distribute the ball, really. I’m so excited in this offense. Us just being in OTAs, learning the plays, going through it with our defense, and stuff.”

Just the phrase “not a run-first offense anymore” is enough to give us all the tingles, but then he doubled down and shared how excited he is as a wide receiver to be a part of what they’re building.

Jefferson’s statements echo similar comments that Adam Thielen shared with KFAN radio at the end of May when he shared his first impressions of the new offense and the new leadership staff. “I feel really confident about where we are,” Thielen shared. “There is a difference in the building right now…as soon as you see the offense you’ll notice [the difference].”

For fans of the Vikings who’ve found themselves banging their heads against the wall for most of the last decade watching coordinator after coordinator following Mike Zimmer’s direction of leaning on the run first, this is a thrilling revelation. By all accounts, from the people inside the building, the complexity and covertness of this offensive scheme is drastically different from what we’ve become accustomed to with this team.

Then this all begs the question, how will a dynamic offensive scheme impact players like Kirk Cousins, Justin Jefferson, Dalvin Cook, Adam Thielen and Irv Smith Jr.? It’d be tough to say that it’s going to have a large negative impact on any of them. I guess that all depends on how quickly they can master it and put it on the field on Sundays?

Vikings vs. Dolphins Takeaways from Week 6