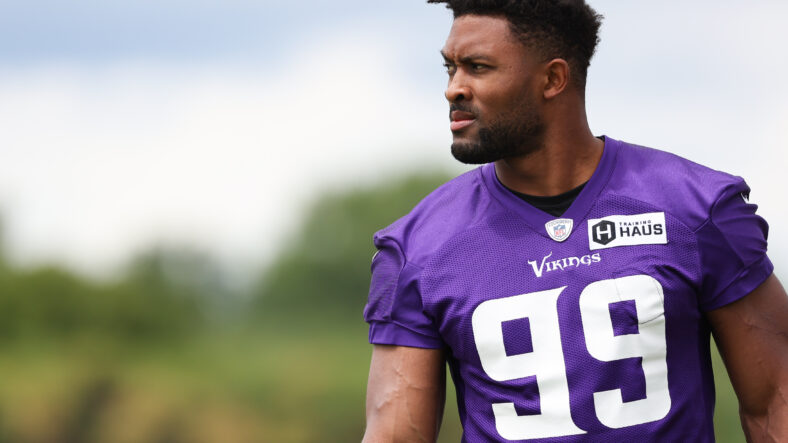 The Minnesota Vikings defeated the Detroit Lions by four points on Sunday, raising the team’s record to 2-1 in 2022 and gaining a spot atop the NFC North.

Kevin O’Connell’s team only led for 45 seconds, but that was just enough to get the job done. Wide receiver K.J. Osborn caught a dart from quarterback Kirk Cousins and scampered into the endzone from 28 yards away, the final score of the afternoon.

On defense, these were the top performers per Pro Football Focus:

Danielle Hunter and Za’Darius Smith had the weird distinction of headlining the Vikings PFF performances despite the team registering no sacks and virtually no pressure on Lions quarterback Jared Goff. Still, both men did enough, apparently, to lead Minnesota’s defense, according to PFF. Hunter recorded 3 tackles and 1 tackle for loss, while Smith also added 3 tackles but 2 tackles for loss.

Josh Metellus was the defensive surprise on Sunday, earning the start instead of 1st-Round rookie Lewis Cine. Per pregame chatter, Metellus and Cine were supposed to split snaps against the Lions, but Metellus played cover to cover, not coming off the field on defense. He notched 11 tackles, two passes defended, and a game-sealing interception.

An early quiet savior for the Vikings 2022 defense, Dalvin Tomlinson did an adept job individually as Minnesota’s defense continued to allow chunk yards to opposing teams. Through three games of 2022, only the Arizona Cardinals have surrendered more plays of 15+ yards to opponents than the Vikings. Tomlinson tallied four tackles in Week 3 to help anchor the defense.

Finally, Jordan Hicks authored his best game to date as a Viking, a man added to the roster in March as a replacement for Anthony Barr, who now plays for the Dallas Cowboys. Hicks made some splashy, game-altering plays versus the Lions, much like he did in previous stints with the aforementioned Cardinals and Philadelphia Eagles earlier in his career.

As a team on defense, Minnesota is a mixed bag. It’s showing up in clutch spots, not allowing a single point in the 4th Quarter to the Packers, Eagles, or Lions. But, overall, the Vikings ranks 30th in the league in yards allowed — not ideal.

The Vikings travel to England for a showdown with the New Orleans Saints in Week 4.

We need to talk about the Vikings Plus-Sized Punter

Can Adam Thielen Overcome his Modest Start to the Season?