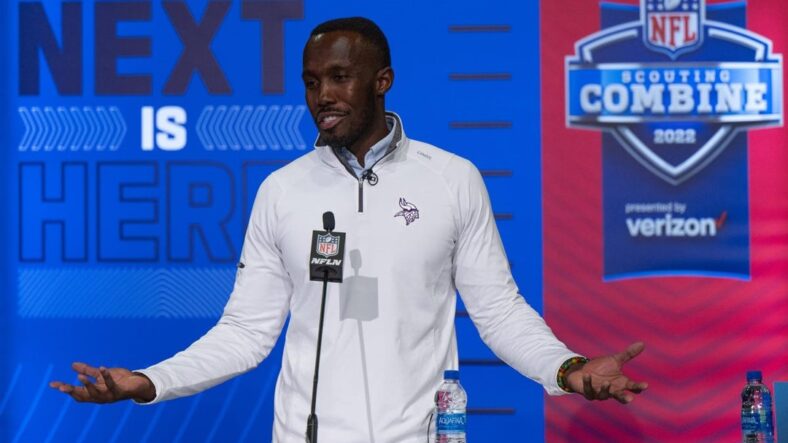 The 2022 regular season is three days away, with the Minnesota Vikings hosting the Green Bay Packers in Week 1. The team’s roster is mostly set, but one Vikings rumor will not die.

Since June, Minnesota has been linked to the free agency of future Hall of Famer Ndamukong Suh, and with even just a few sunrises until go-time for the Vikings, the Suh chatter persists.

It all started about 2.5 months ago with this tweet.

And since then, the back-and-forth has been a “maybe-maybe-not” on Suh joining the Vikings. Suh reportedly wants a contract worth around $8 million per season, while Minnesota has around $2 million in cap space. So, the disconnect is vivid.

Minnesota stunningly released Armon Watts last week, who was scheduled to start at “Suh’s spot.” Then, general manager Kwesi Adofo-Mensah traded for Ross Blacklock from the Houston Texans to fortify the Watts-Suh position. Minnesota released a depth chart this week, and free-agent Jonathan Bullard was slated to start over Blacklock and, of course, Watts (who now plays for the Chicago Bears).

All set, right? Not so fast.

Darren Wolfson from KSTP in the Twin Cities reaffirmed on Tuesday that Suh-to-Minnesota isn’t dead. Speaking on the Suh topic to Mackey & Judd, a SKOR North YouTube show, Wolfson opined, “There have been new talks. My sense is, Judd, those talks have been initiated by Suh’s camp, not by the Vikings.”

And this is significant because of the initiator. Suh circling back to the Vikings front office for a chat may indicate a meet-in-the-middle solution for contract talks.

Suh is a five-time Pro Bowler and three-time 1st-Team All-Pro. He’s likely headed toward Hall of Fame induction when he calls it quits, although his reputation at times in his career isn’t spotless. Due to some on-the-field antics, Suh was labeled “dirty” as a younger man.

He’s tallied 70.5 sacks in his career with the Lions, Dolphins, Rams, and Buccaneers. At age 35, he may have one or two seasons left, presumably leading him to a contending team for a final hurrah. Suh encountered a textbook down year in 2021, grading an underwhelming 49.4 score from Pro Football Focus. Yet, the 2022 season, wherever Suh lands, will determine if the forgettable year was due to age or an outlier.

A Vikings front five would like this with a Suh addition:

That group would showcase the big-name talent necessary to thrive and would only falter due to injury. Otherwise, one can swap Suh with Bullard’s name.

For a deal to materialize, the Vikings would likely have to free up cap space, meaning a player like Eric Kendricks could be asked to restructure. But Minnesota had no problem doing that in the spring with Adam Thielen and Harrison Smith.

Suh won a Super Bowl with the Buccaneers in 2020.

Bitcoin May Face Another Crash Due to This ECB Move: Details

Explained: The WR Section of the Vikings New Depth Chart